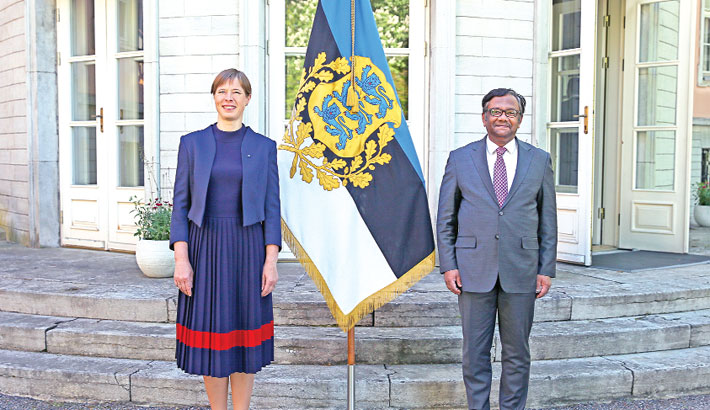 M Allama Siddiki, non-resident Ambassador of Bangladesh to Estonia, with residence in Copenhagen, poses for a photo with Estonian President Kersti Kaljulaid after presenting his credentials at the Presidential Palace in Tallinn on Thursday.

M Allama Siddiki, non-resident Ambassador of Bangladesh to Estonia, with residence in Copenhagen, presented his credentials to Estonian President, Kersti Kaljulaid at the Presidential Palace in Tallinn on Thursday.

In an audience with the President, the new ambassador mentioned the facets of socio-economic development in Bangladesh, especially in the areas of ICT, poverty eradication, women empowerment, and religious harmony.

Then he raised and discussed in brief the issues of mutual trade and investment, education cooperation, cultural exchange, and Rohingya repatriation, said the Foreign Ministry on Friday.

Congratulating the new ambassador, the Estonian President of Estonia extended her warm greetings to the President and the Prime Minister of Bangladesh.

She assured all sorts of cooperation of the Estonian government in further strengthening the mutual ties between the two friendly countries.