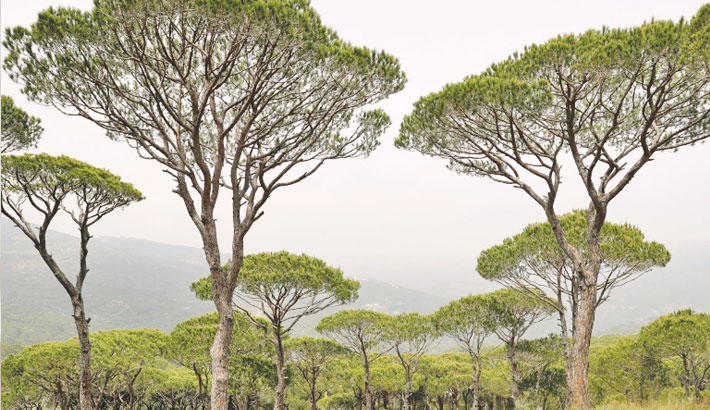 QSAYBEH: The scenic region of Mount Lebanon has long produced pine seed, a regional delicacy, but harvests have collapsed amid an exotic insect infestation experts say is accelerated by climate change.

Lebanon, wedged between the mountains and the Mediterranean Sea, is best known for the iconic cedar tree depicted on its national flag — but it also has pine trees that make up nearly 10 percent of total forest cover, reports AFP. Pine nuts harvested from their cones — a popular ingredient in Middle Eastern cuisine — have been dubbed “white gold” because of their traditionally lucrative sales, especially to wealthy Gulf states.

But the natural treasure trove is under attack.

The culprit is the western conifer seed bug, a native to the western United States - where it is also known as the “stink bug” - which has spread to Eurasia, most likely by hitchhiking on timber shipments.

In the Qsaybeh pine forest east of Beirut, Elias Neaimeh, head of the syndicate of pine seed farmers, pointed to the damage it has caused: the dry, dead trunk of one pine tree, and cones scattered on the forest floor.

In a normal year in the past, Neaimeh said, “I used to produce around 16 tonnes of pine cones, but today I barely harvest 100 kilograms”.

He used to make more than $40,000 a year from selling around 600 kilograms of white pine nuts a year, but now his income has dried up, at a time when Lebanon’s deep economic crisis has plunged millions into poverty.

In Lebanon, farmers started noticing a decline in output in 2012, but it took them three more years to detect the cause.

Entomology expert Nabil Nemer identified the insect as the western conifer seed bug, or WCSB, which pierces cones to suck out sap and developing seeds.

The insect reached Turkey from Europe in 2010 before arriving in Lebanon, where it has since spread across most conifer forests.

“It is very harmful,” Nemer told AFP of the pest that attacks pines, cedars and cypresses.

“We noticed that sometimes up to 10 insects feed on a single cone,” said Nemer, a professor at the Holy Spirit University of Kaslik.

“When they infest small developing cones, the cones wither completely and fall to the ground.”

Nemer said climate change is creating a favourable environment for the insects.

The bugs’ infestation is compounded by the absence of its natural predators native to the United States, he said.

Many farmers have turned to pesticides, but Nemer warned that chemicals “could cause problems for exports and food safety”.

Back in Qsaybeh, Neaimeh said that pesticides had allowed for a temporary and modest recovery in 2016 and 2017.

“There was a 30 percent decrease in the number of infested cones,” he said, bringing some relief from an infestation rate of 85-90 percent.

But in the absence of a centralised pest control policy, many forests remain neglected, further devastating output.

“Today we produce no more than 200 tonnes of pine nuts annually across all of Lebanon,” down from 1,200 tonnes before 2015, Neaimeh said.

This, in turn, has caused prices to skyrocket, with one kilogram (2.2 pounds) of pine nuts now selling for more than one million Lebanese pounds ($650) — almost twice the monthly minimum wage.

The village of Bkassine southeast of Beirut is home to the biggest stand of pine trees in the region, with 100,000 trees covering around 220 hectares.

But these lush woodlands too are under threat — from a double infestation.

Aside from the WCSB, another insect, the pine shoot beetle, which feeds and breeds beneath the tree bark, has added to the damage, said Nemer.

Bkassine mayor Habib Fares said that back in 2013, the year of the last big harvest, the municipality earned 500 million Lebanese pounds (more than $300,000) from pine seeds.

Since then output has plunged 70 percent, he said, adding that “the municipality does not have the means to deal with the crisis”.

“Every year, we try to spray pesticides over a specific segment of the forest,” he said, adding that such limited operations do not prevent the return of the pests.

Combating such pests is always difficult, but Lebanon’s worst economic crisis in decades has made the problem a secondary concern for authorities.

Support from the agriculture ministry has declined over the past two years, say farmers.

But a solution cannot wait, and would indeed help the economic recovery, argued Nemer, saying that “the local community can benefit”.

“But they may abandon their forests if the situation continues as it is. Pine nuts in Lebanon are known as white gold. We must find a solution.”