Taskin set to be back on central contract list 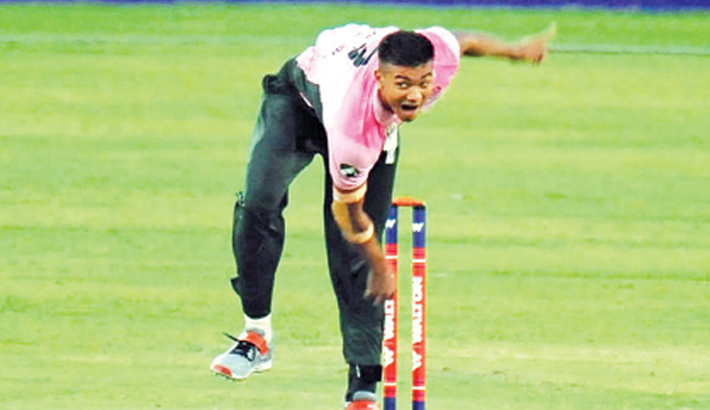 Bangladesh pacer Taskin Ahmed is all set to earn the central contract for both red and white ball categories following his decent performance against Sri Lanka in the recently-concluded Test and ODI series.

The 26-year old, who wasn’t part of ‘BCB Central Contract List 2020’, impressed the selectors through his performance since his making comeback to international cricket in January this year against West Indies after he was sidelined for nearly three years due to his injury and form.

However, the team management isn’t thinking of including Taskin in T20Is only to manage his workload properly despite providing him a central contract for both red and white ball categories.

“Look we have to understand that we can’t put an overload on Taskin. He bowled a lot of overs in the Test series against Sri Lanka but at the same time, if we push him to play all three formats, it can be harmful in the long run,” Khaled Mahmud, who was Bangladesh team leader in the recent series, told The Daily Sun.

“We need to make a balance somewhere and that is most important if we want long service from players like Taskin,” he added. The Daily Sun learnt that the team management briefed Taskin regarding their plan of action in Sri Lanka after the two-match Test series and Taskin also admitted it.

“Yes, Nannu (Minhajul Abedin) sir spoke with me after the series. It’s not that I will not play T20Is, it’s just that they wanted me to concentrate on Test and ODIs,” Taskin said. Meanwhile, Bangladesh Cricket Board sources confirmed The Daily Sun that they have already prepared the central contract list which is expected to be approved in the next board meeting.

“As you all know, we basically finalised the contract for the period of January-December. But we are doing it right now because we didn't play much international cricket last year for the coronavirus outbreak,” BCB Chief Executive Officer Nizamuddin Chowdhury told reporters.

“So the selection panel and the cricket operations committee are preparing the name taking into account the performance of the recent past. If we get the names in the next board meeting then we will consider it to make the next decision,” he added.

Last year a total of 17 cricketers were named in the BCB central contract list with only seven cricketers receiving contracts for both red and white ball. However, the number is likely to be increased by just one to 18 cricketers this year.

The Daily Sun learnt that the selection panel has already prepared the list of contracted cricketers that marks the return of Shakib Al Hasan in the all-format category.

The return of Shakib in the all-format contract also brushed aside all the speculations that were floating in the air for long that he is reluctant to continue as a contracted cricketer.

BCB excluded Shakib from the national contract only after he was banned by the ICC for failing to report corrupt approaches in October 2019.

It was also learnt that Mahmudullah and Mustafizur Rahman, who were excluded from red-ball contract last year, failed to earn their place in red-ball contract as both of them are only in white-ball contract category. BCB, which introduced red and white ball categories for their central contract for the first time last year, is also unlikely to increase the salaries of the national cricketers this year.