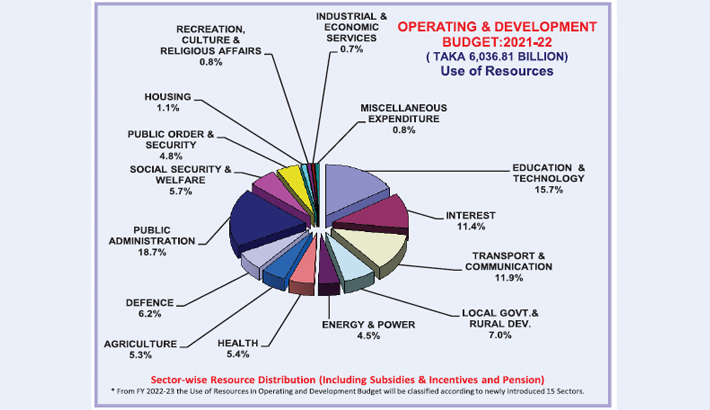 The government has proposed a series of reform measures to implement the mega budget proposed for the fiscal year 2021-22.

AHM Mustafa Kamal on Thursday placed Tk 6,036.81 billion or GDP’s 17.5 percent budget for the upcoming fiscal year with a deficit of Tk 2,146.81 billion. This is the largest budget deficit in the history of Bangladesh.

He said, “The country has been gradually moving from an agro-based economy to a production-oriented economy following the pursuit of effective government policies and strategies during the last 12 years.”

“Therefore, the contribution of agriculture to the GDP has been gradually declining and the desired structural transformation is taking place in the economy.” Bangladesh has already been qualified for graduation from the least developed country to a developing country.  “We need a strong industrial and manufacturing sector, which will help sustain high economic growth,” the minister emphasized.

The government is going to support mechanization of agriculture, development of the agro-processing sector, skill development and productivity enhancement.

It will also fund expansion of training and education related to 4th Industrial Revolution, encouragement of online based outsourcing work, self-employment/creation of new entrepreneurs, and encouragement of basic and practical research at the university level, Kamal said.

He said the government will take effective steps to build infrastructures and provide other policy supports to improve the investment-friendly environment.

To increase investment and generate employment, steps have been taken to establish 100 economic zones across the country, which will provide employment opportunity of an estimated one crore people.

The government is laying special emphasis on the implementation of projects under Public-Private Partnerships (PPP) to attract investment.

Currently, as many as 76 projects are scheduled to be implemented under the PPP, against which the investment worth $27.76 billion has been mobilized.

The process is underway to bring the manufacturing activities of export-oriented industries under the Customs Bonded System.

Efforts are going on to accelerate implementation of various reform activities to improve of the Ease of Doing Business Index, the minister said. One Stop Service (OSS) portal system has been in place since 2019 to provide all investment related services from a single platform.

All services related to land will also be brought under automation through 18 software.

To bring greater dynamism in the judicial process, steps have been taken to digitalise the overall justice system in the country.

The government has been providing adequate legal and financial assistance to the Anti-Corruption Commission to ensure transparency, the minister said.

“Efforts are being made to limit the average weighted interest rate on loans and deposits in sectors other than high-risk credit cards and consumer loans to a single digit level.”

He mentioned some steps to keep the liquidity management of the money market smooth.

The steps include, among others, redcuing of the Compulsory Cash Deposit Rate (CRR) to 4 percent for internal units of scheduled banks.