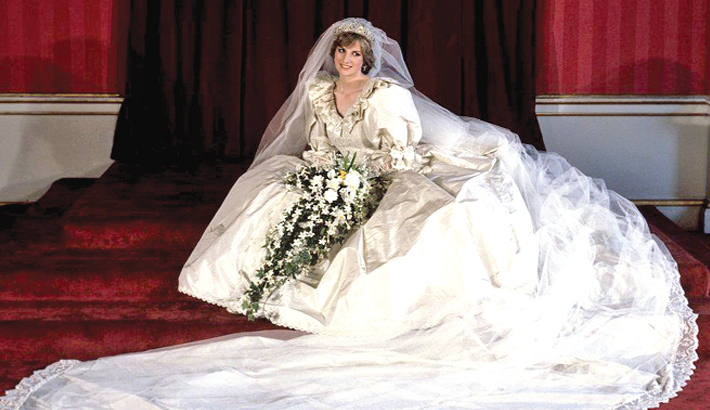 The dress that Diana, Princess of Wales, wore on her wedding day 40 years ago has gone on display at her former Kensington Palace home, reports BBC.

Her sons Prince William and Prince Harry loaned the dress to the exhibition, which launched a month before Diana would have turned 60.

It was designed by David and Elizabeth Emanuel for the July 1981 wedding. The gown features a 25ft (7.6m) sequin-encrusted train, which filled the aisle of St Paul’s Cathedral. Organisers of the exhibition, Royal Style in the Making, said the dress is “now among the most famous in bridal history”. The dress has a fitted bodice overlaid with panels of antique Carrickmacross lace originally belonging to Queen Mary.

As well as the nod to history, it was very much in keeping with early 1980s fashion with its large puffed sleeves trimmed with bows and deep ruffles of taffeta.

In a video shown at the exhibition, Ms Emanuel remembers Diana phoning to ask her and her then-husband to make her dress.

“It was one of those strange moments where you know your life is never going to be the same again,” she said.

As well as their mother’s wedding dress, the Duke of Cambridge and the Duke of Sussex have also loaned her going-away dresses to the show.

The exhibition, which looks at designing an outfit for a royal client and also focuses on designers who dressed the Queen, Princess Margaret and the Queen Mother, is being held at the Kensington Palace Orangery.

It will continue until 2 January and entrance to the exhibition is included when booking a tour of the palace.

The exhibition also features a rare surviving toile - an early version of a finished garment - for the 1937 gown worn by Queen Elizabeth (later known as the Queen Mother) for King George VI’s coronation.