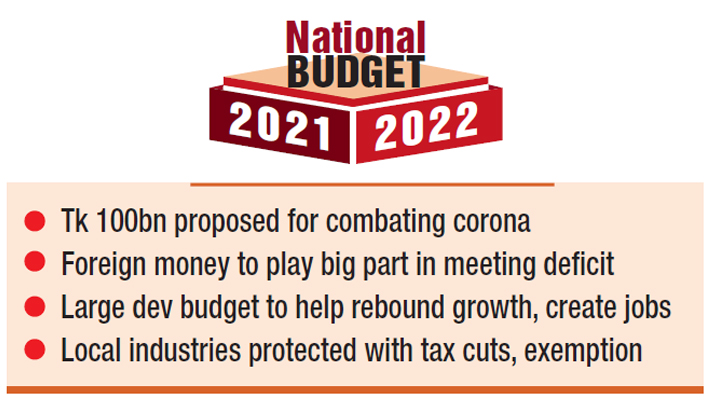 The government has set out an elusive spending plan to expedite the corona recovery efforts while pumping money into key areas to sustain and accelerate economic growth with scanty resources and weak execution capacity.

The government has targeted a 7.2 percent growth in gross domestic product (GDP) in the 2021-22 fiscal though the growth dipped to 5.4 per cent last fiscal.

The new budget is Tk 646.98 billion or 12 percent higher than revised budget of Tk 5389.83 billion for the current fiscal year.

The finance minister tried to set a balance between high demand for money to feed his expansionary fiscal plan and limited resources without increasing most of the tax rates but widening the tax net.

The total revenue earning target, including grants, has been set at Tk 3,924.90 billion. Of which, total tax revenue will be Tk 3,460 billion where the contribution of NBR tax will remain unchanged at Tk 3,300 billion like that of the current fiscal year.

The government hopes to narrow the ballooning budget deficit mainly with foreign sources. The sales of savings certificates is also set to play a significant part as its interest rate is going up in FY 22.

Out of the total deficit, Tk 1,01,2.28 billion will be financed from external sources, while Tk 1,134.53 billion from domestic sources, including Tk 764.52 billion from the banking system and Tk 370 billion from savings certificates and other non-bank sources.

The budget for FY 22 comes at a critical time marked by a global pandemic that has skewed revenue earning and eroded the government’s budget implementation capacity amid a disrupted economic situation.

Kamal went for generous spending for the country’s steady journey towards a prosperous future with a hope of a rebound in growth while saving lives and livelihoods from the ongoing pandemic that calls for high spending.

The finance minister had announced a Tk 5.68 trillion budget for the current FY 21, for the first time with 6 percent deficit against a usual 5 percent comfort zone, with a high hope of corona recovery blended with far-reaching development aspirations.

The plan fell apart as only 42 percent of the ambitious spending plan was executed in 10 months of FY21 mainly because of what economic analysts blame --weak institutional capacity stemmed from lack of reforms.

Similarly, the revenue earning target is set to be undershot by a large margin at the end of June despite an uptick because of a sharp twist in the economy.

This has put the implementation of another expansionary budget in a corona-torn economy in a big question.

Like the current fiscal year, the next fiscal year is going to start with a lockdown, though not stringent, and the risk of a third wave creeping in because of new and stronger variants of coronavirus.

Experts said it is going to be an uphill task for the government to execute his massive spending plan though the budget size hovers around GDP’s 17 percent, much below even the South Asian average of 24-25 percent.

With the massive spending plan, higher allocations have been made to predominantly meet corona emergencies.

Health, agriculture and food security, and a widening social safety net have been prioritized to safeguard vulnerable people and set the economy on a high-growth track in FY 22.

The finance minister has set aside a block allocation of Tk 100 billion to bring some 100 million people under government vaccination campaign by FY22 to save lives as well as the economy from the spread of the deadly virus.

Allocation on the social safety net rose to Tk 1,076.14 billion to safeguard people who are already vulnerable or have been pushed back to the vulnerable segment by the pandemic. The allocation is 17.83 percent of the budget and 3.11 percent of the GDP, the finance minister informed.

Allocation proposed for the social infrastructure sector in the proposed budget is Tk 1,705.10 billion which is 28.25 percent of total allocation. It includes Tk 1,558.47 billion for human resources sector like education, health and other related sectors.

Allocation proposed for the physical infrastructure sector will be Tk 1,796.81 billion or 29.76 percent, in which Tk 741.02 billion will go to overall agriculture and rural development, Tk 694.74 billion to overall communications, and Tk 274.84 billion to power and energy sector.

A total of Tk 1,451.50 billion has been kept aside for general services, which is 24.04 percent of the total allocation.

Some Tk 346.48 billion (5.74 percent of the total outlay) has been proposed for public-private partnership (PPP), financial assistance to different industries, subsidies, equity investments in state-owned, commercial and financial institutions.

A total of Tk 685.89 billion has been allocated for interest payment and Tk 51.03 billion for net lending and other expenses.

The government has not compromised its long-term development vision while meeting the immediate needs of development expenditure.

The size of the Annual Development Programme (ADP) has shot up to Tk 2,253.24 billion in the next fiscal to prioritize health, agriculture and employment generation.

The finance minister said human resource development, job creation and immediate need for money in the health and agriculture sector have been put at the cornerstone while allocating the ADP resources.

Besides, the government wants to increase public investment through ADP to stoke the sluggish private investment and create more jobs.

Local industries, businesses, women entrepreneurs, IT services, export diversifying industries will get some protection in the fiscal measures announced for next fiscal.

In view of the Covid-19 health emergencies, setting up of private hospitals outside major cities will be welcomed with tax benefits.

Corporate tax has been slashed by 2.5 percentage points while import of industrial raw materials saw 1 percentage point cut in advance tax (AT) to revamp the local manufacturing sector.

However, Mobile Financial Services (MFS) will have to pay 7.5 percentage points higher corporate tax. At the same time, smokers have to pay more.

The individual tax-free ceiling remained unchanged at Tk 3,00,000 but raised to Tk 3,50,000 for the transgender people.

The finance minister has also rolled out mid and long-term plans in the budget to address the risks of LDC graduation when Bangladesh will lose preference in global trade.

As part of reform initiatives, the government will strengthen the Anti-Corruption Commission (ACC) to make it more transparent to combat grafts.

The finance minister also pledged to bring changes in customs duty structure to fend off money laundering and tax dodging through enacting a new law.