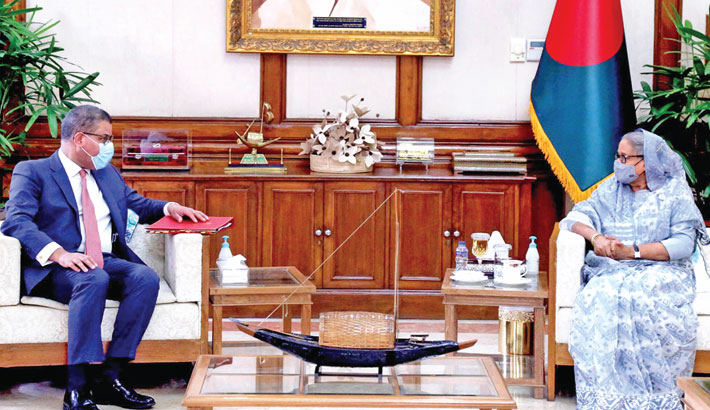 She said this when COP26 President-Designate Alok Sharma met her at her official residence Ganobhaban.

He said they discussed various issues like the climate change situation, its global adverse impacts, mitigation and Climate Change Fund and Covid-19 pandemic.

Sheikh Hasina said Bangladesh is going to be the worst affected like some other countries across the globe due to the climate change even though the carbon emission of these countries are very negligible. “We’ll be affected massively,” she said. Hasina said the government has taken various programmes to increase the renewable energy use in mitigating the demand for power.

She said there are currently some 5.8 million solar power connections in Bangladesh.

The Prime Minister said her government and the Awami League as a party are engaged in massive tree plantation to improve the environment of the country.

Talking about the Covid-19 pandemic and vaccination, the Prime Minister said the government has adopted various measures to run the economy apart from containing the coronavirus infection although Bangladesh is a densely populated country. COP26 President-Designate Alok Sharma Has invited the Prime Minister to attend the  COP-26 to be held in November next in Glasgow.

He put emphasis on converting power generation in the Green Energy system.

Alok Sharma hoped that Bangladesh under the leadership of the Prime Minister will play an important role as the current president of Climate Vulnerable Forum (CVF).

Ambassador-at-Large Mohammad Ziauddin was, among others, present on the occasion.