Meeting revenue target to be a challenging job

Despite the pandemic-induced slowdown, the government is set to place another challenging revenue target for the National Board of Revenue (NBR) for the 2021-22 fiscal.

Amid the shortfall of revenue collection by around Tk 1 lakh crore during the last few fiscals, the government is likely to set NBR’s revenue target at Tk 3,30,000 crore for the next fiscal year, starting from July 1.

Finance Minister AHM Mustafa Kamal is set to unveil the budget for the 2021-22 fiscal today (Thursday) with a focus on economic recovery and sustaining growth in the midst of the challenges triggered by the corona pandemic.

Sources at Finance Ministry and NBR said the revenue target of NBR would remain unchanged for the next fiscal year.

Typically, the National Board of Revenue (NBR) generates around 85 per cent of the government’s total tax-revenue income, while the rest comes from non-NBR sources. 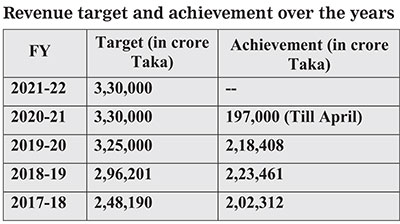 The government usually sets ambitious revenue targets every fiscal and the targets remain unfulfilled by a huge margin. In the current fiscal, NBR has revised the target to Tk 301,000 crore from original Tk 330,000 crore. But it was able to collect Tk 197,000 crore or 65.45 per cent of the target till April, with just two months in hands.

In the next two months, NBR will have to collect around Tk 104,000 crore to achieve the revised target which seems to be an impossible task.

Experts think that this year NBR’s revenue collection may fall short of the target by around Tk 55,000-65,000 crore.

Keeping that in mind, they said the revenue target for the next fiscal will be ambitious as the corona-stricken economy has narrowed down the scope for revenue growth.

Former NBR chairman Muhammad Abdul Mazid said the revenue board in recent years has failed to achieve revenue target as the target has been fixed by the government, not by the NBR itself.

Replying to a query, former NBR Chairman Dr Abdul Mazid said NBR faces challenges due to extra stress to meet the target, imposing an additional tax on the regular taxpayers and absence of proper guideline on the revenue path.

“As a result, the government has to revise many development programs in the middle of the implementation or cut the allocations for some important projects --- causing waste of public money,” he added.

He also suggested ministries, divisions and the private sector work together to improve the production of goods and increase money flow in the financial markets to support the country’s revenue growth.