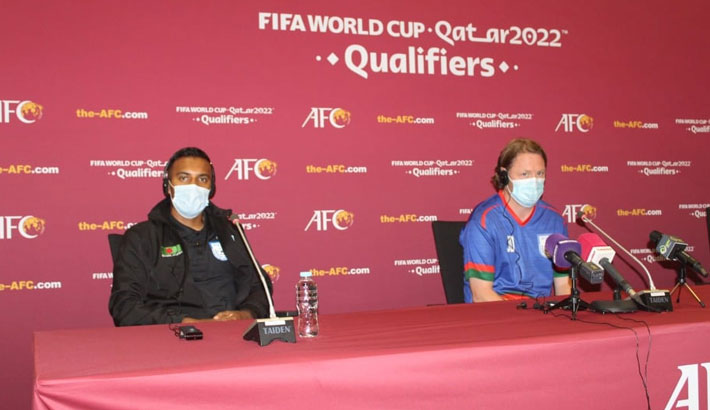 Bangladesh will be looking forward to clinching a victory when they take on Afghanistan in their sixth match of FIFA, AFC joint qualifiers at Jassim Bin Hamad Stadium in Doha, Qatar today.

The match is scheduled to start at 08:00pm and will be televised live on T Sports.

Bangladesh are currently ranked bottom in the five-team points table as they could earn only one point from their previous five matches and already lost their chance to play the next round of the qualifiers.

The men in red and green couldn’t take enough preparation ahead of their last three matches of the joint qualifiers round two for FIFA World Cup 2022 and AFC Asian Cup 2023 mostly because of their administrative failures.

Bangladesh, who began their camp in Dhaka in mid-May, was initially scheduled to play two practice matches in Qatar and later in Saudi Arabia but Bangladesh Football Federation failed to arrange any of the matches which forced the national team to complete their preparation with a warm-up match against Sheikh Jamal DC before leaving for Qatar.

The team also received several injury blows as forwards Saad Uddin, Nabib Newaj Ziban, Mahbubur Rahman Sufil and defender Bishwanath Ghosh couldn’t travel with the team as they were ruled out the remaining matches after complaining of different injuries.

However, national team captain Jamal Bhuyan was confident to earn full three points against their opponents, whom they lost to 0-1 in the first-leg match at Tajik capital Dushanbe in September 2019.

"The match is going to be a tough one. They (Afghans) are too physical, they are taller than us. But we are technically strong, we have speed, we have some fast players. So, we will try to give 100 percent in the match. We are expecting to earn a full three points,” Jamal told the reporters on Wednesday.

Head coach Jamie Day was hopeful that his charges would give their best effort in the field and earn some points for them.

“The boys (players) worked really hard last week to get the preparation right for the game. We know it is going to be an extremely tough game. Afghanistan are a very good side, have a lot of players playing in Europe and abroad. So, we need to be technically good and we need to give our best if we try to get a result,” said Jamie.

“What we can ask them is to give their best. We just need to make sure when we get our chances, we will take them and then defend well. We will try our best to get some points for Bangladesh. We need the whole Bangladesh's support for the three games that will help the players and inspire them to get the result that we like the best.

“The attacking side is young and enthusiastic but lacks experience. Let’s see what they can do. We are missing four key players which is a blow but we just have to deal with the situation as best we can,” the English head coach added.

Bangladesh are scheduled to play their last two Group E matches against India and Oman on June 7 and 15 respectively at the same venue.