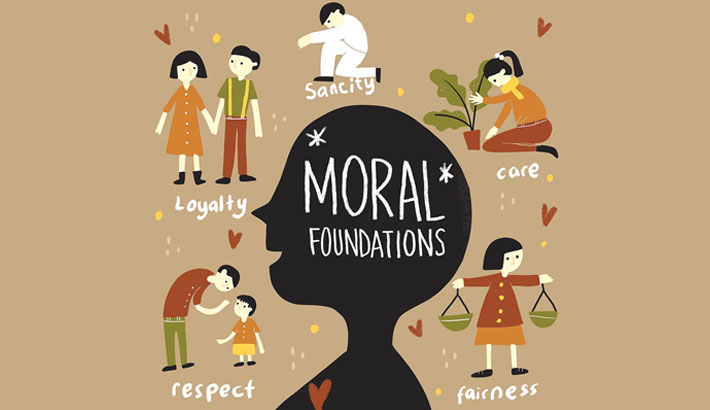 Where is morality?’, if one asks, then nobody seems to hesitate to answer, it is nowhere now in Bangladesh. It has become now a million dollar question as from the high ups of the country to the pious cleric, politicians, businessmen, bureaucrats, university teachers to poor school masters; nobody is spared from the allegations of corruption. When talks about such moral degradation emerge in a city seminar or either in a village tea stall’s gossiping, usually it blames the education system of the country to be responsible for making more heinous minds among the educated ones.

No wonder it makes when a news report reveals that a university teacher is accused of harassing his female student sexually; or a madrasha teacher is blamed of sodomy. It is more than a shame to believe that a university vice chancellor escaped from the campus with police safety. We are to believe that our total education system fails to produce the minds as it should be in moral capacity. It is almost proved that a politicised education system is also trying to create a politicized moral education – be it school, or madrasha or any other platform of learning.

Whatever there is in papers, the subjective reality shows five trends of education are pertinent to primary and secondary education in Bangladesh. They are commonly Bangla medium, English Version, English Medium, Aliah Madrasha and Qoumi Madrasha.  Though the government is putting efforts to expand technical and vocational education at the secondary and higher secondary level, this education is yet to get the momentum as per demand of employment size. So under NCTB curriculum, general education being the popular trend of education in Bangladesh includes majority students.  Bangla medium and English versions are the trends mostly recognised as general education. Besides, the curriculum of Alia madrasha is also set by NCTB though not sufficiently valued as productive in line with the job market.

The very much errant trends of education in Bangladesh are English medium and Qoumi madrasha. They have their own syllabi mostly far away in maintaining national productivity scale. These two trends belong to two opposite classes of the society --- ultra-poor and ultra-rich. English medium- the highly expensive education mood in Bangladesh is usually grabbed by the elite classes, while the marginal people in the society opt for education in Qoumi madrasha almost free of cost.

Students from middle class families are mainly the learners of Bangla medium and English versions while the lower middle income family tends to send their wards to Aliah madrasha. This prevailing social class system in Bangladesh along with the curriculum imparted to the students sets the cultural standard of the learners that we find as morality. The frustrated youths of the elite class with privatised Western education, therefore, feel no regret to resort to extremism in the name of religion like those of the poor class. There is the loophole in the curriculum where religion is the subject to be taught, but morality is not the object to gain from that learning.

‘Religion and Moral Education’ is a subject taught in every grade under primary and secondary level in general education. The subject varies according to students’ religious identity meaning a student from a very early age learns to distinguish him/herself as Muslims, Hindus, Buddhists or Christians. The grand motto of inclusiveness that is frequently uttered in education fails at a very nascent stage of the human child by this way. Instead of learning to love their creator, children learn to be lured for heaven, or to be afraid of hell, and thus — ‘greed and fear’ gradually occupies the children's minds from the very beginning of learning. So, how is it possible for a child to learn morality from greed and fear -- that have already kept the mindset of a human child occupied?

There is the conflict of learning morality through religion. In a diversified society where education can work for unity, there in our society education has thus been playing the role of dividing the nation in terms of religion, caste, colour and social class. It is the curriculum of general education that lacks uniformity, let alone the English medium or madrasha education system.

English medium education is producing a class of generation who does not know where the roots of national identity exist. A kind of solitude they learn in their childhood from the so-called English medium education. Most of those students have no apt understanding of mainstream culture. Therefore, those students when opt for self-identity, they then find self-contentment in extremism.

In case of madrasha education when we talk about morality, one may argue for moral teachings of Islam. I do sincerely agree with them regarding the aspects of morality in Islam. But with an utter despair, the pedagogy of madrashsa education, both of Aliah and Quomi, does not put due emphasise on what should be the moral lessons of Islam. Usually in every religion, there are two aspects for a man to comply with. One is ceremonial i.e. worship, prayer, rituals, and the other is moral. Our system of education as pedagogy in both types of madrasha – Aliah and Qoumi – mostly favours learning of the ceremonial things of Islam. And consequently, we find a large group of people educated from madrassah who are, in profession, dependent on other sections of social class. We should remember, dependence on others never brings dignity rather than isolation from freedom. And without freedom and democracy, there will be no basis to make a generation to learn morality. We must be aware of not having a group of people who have almost no match with national productivity.

No need to say, we are now surely in need of people with good principles and morality for a better future. Our whole education system for moral teachings keeps its faith so far on religion based education. But other subjects like literature, social science, global studies etc. also have the lessons to learn morality. We just fail to present these subjects with due consideration before the students. Now it’s time to look for other modules of education such as human rights education, civic education, rights education, citizenship education, governance education and so on with religion as the lesson of moral base. Our educationists and policy makers must think of it.

The writer is a PhD researcher on Human Rights Education