PRAN to procure 60,000 tonnes of mangoes 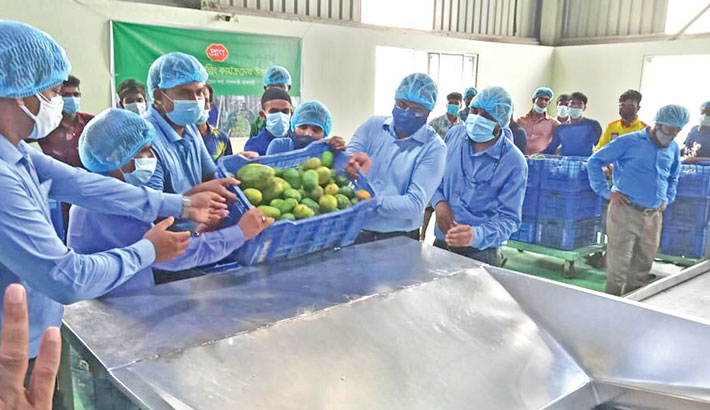 PRAN will procure 60,000 tonnes of mangoes for the season to produce mango drink, juice, mango bar and other food items.

Sarowar Hossain, Deputy General Manager of Barind Industrial Park (BIP) in Rajshahi inaugurated the activities through a programme held at the park on Tuesday.

The activity also has been started at PRAN Agro factory in Natore at a same time.

He also added that pulp is being produced in the plant following aseptic technology. The advantages of this technology is to preserve the pulps for two years maintaining its taste and freshness without freezing. In our plant, washing and peeling the mango, waste management, packaging of pulp and related all steps have been conducted without touch of hand.

Kamruzzaman Kamal, Marketing Director of PRAN-RFL Group, said, “PRAN has started collecting a large amount of mango from the farmers of Rajshahi, Chapai Nawabganj, Naogaon, Natore and Pabna. After collecting the mango, we send it to our Natore and Rajshahi factories.

From the pulp, various kinds of mango juice and drinks and mango bar are being produced in the factories and we are exporting the product to 145 countries around the globe regularly.”