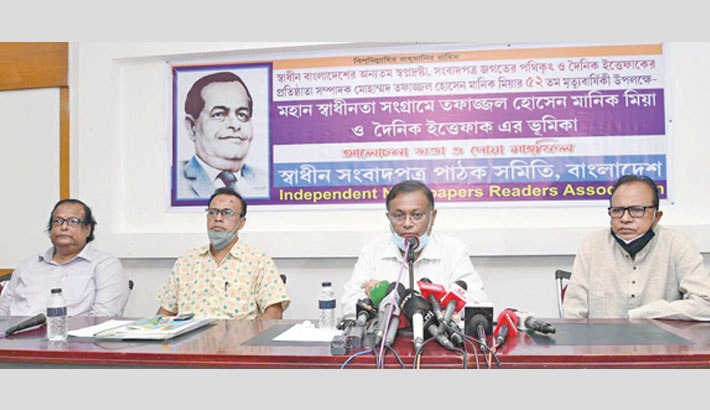 Information and Broadcasting Minister Dr Hasan Mahmud addresses a discussion at the Jatiya Press Club in the capital on Tuesday, marking the 52nd death anniversary of Tofazzal Hossain Manik Mia, a pioneer of the country’s newspaper industry. SUN PHOTO

Information and Broadcasting Minister Dr Hasan Mahmud on Tuesday urged BNP to see the picture of country’s tremendous development in world media before criticising the government.

“It is regrettable that many don’t want to see and understand Bangladesh’s remarkable development that took place in the last one decade under the Awami League government led by Prime Minister Sheikh Hasina,” he said.

The minister made the comment while addressing a discussion at the Jatiya Press Club in the capital, reports BSS.

Mentioning a report ‘South Asia should pay attention to its standout star’ of Bloomberg, Hasan said this star is Bangladesh. “As per the report, India and Pakistan should learn the formula of rapid development from their neighbouring Bangladesh which was least development country. Pakistan was 70 percent richer from Bangladesh in 1971. And, presently, Bangladesh is 45 percent richer than Pakistan,” he added.

He said the cabinet secretary of Bangladesh has informed that the per capita income of the country is 2227 US dollar. Bangladesh left behind Pakistan in all indexes and neighbouring India in some indexes, said Hasan, also Awami League joint general secretary.

On the other hand, he said, the politics of BNP stuck on the health issue of Begum Khaleda Zia and they don’t think about the health of common people or country’s development.

The minister said, “I would like to urge BNP leaders, including Mirza Fakhrul Islam Alamgir, to see the picture of tremendous development of Bangladesh in different world media before criticising the government.”

About mass media, Hasan said media could play a pivotal role in creating mind of a nation. As the media can lead society in the right direction, it can also lead it (society) in the other direction if it tries.