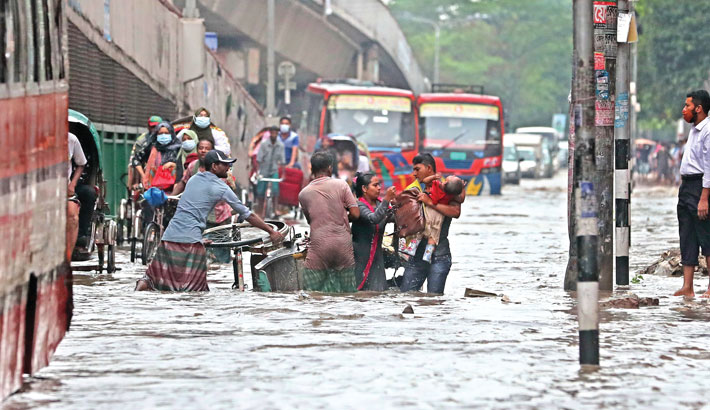 Heavy rain turns different parts of the capital into swamps on Tuesday. A rickshaw with passengers overturns on a waterlogged road at Rajarbagh. Reaz Ahmed Sumon

A heavy downpour triggered waterlogging in many places of the capital early Tuesday, causing immense sufferings for commuters.

As the downpour intensified for nearly three hours, most of the lanes, by-lanes, streets in the capital were submerged in deep water, causing severe traffic congestions and sufferings for commuters.

On Tuesday morning, many commuters, mainly office-goers, remained stuck for hours on vehicles. Many people resorted to wading through the water to reach their destinations.

Alauddin, a resident of Wireless gate area, said: “We hoped that the waterlogging problem had been solved after many years, but the improvement has done nothing even after all that money was spent.”

West Noyatola, Sonalibagh and Malibagh areas also saw waterlogging despite the improvement in drainage system there.

Abul Kashem, a resident of Green Road, said, “The road in front of my house and the adjacent area is completely submerged despite drainage improvements last winter.  I cannot go to work as there is water on my doorstep.”

Those who went out homes faced severe traffic gridlocks.

“I set out for my office from Mirpur at 8am and I got there at 10.30am. It normally takes me a maximum of half an hour,” said Nabila Akhter, a banker.

“Many vehicles broke down in waterlogging after water entered their engines, making the traffic worse,” she added.

Many of them had to pay extra fares to reach their destinations due to lack of public transport amid rain.

Taking advantage of the situation, rickshaw-pullers realised extra fare from most of the passengers, it is alleged.

Many shops and houses in low-lying areas were submerged. Many were seen traveling on rickshaw-vans, getting no other way to reach office.

A number of vehicles were found stuck on the roads due to the water-logging, which led to traffic congestions on many busy roads, including in Mirpur, Green Road and Airport road.

Water started to recede after the rain stopped around 10:00am, he said.

The capital experienced nearly three hours of downpour early in the morning.

The rain started around 6:00am and continued till 9:00am. The sky remained cloudy.

The Met said they recorded 85mm rain in Dhaka on Tuesday morning. The weather office predicted rain until Wednesday.

According to its forecast, moderate rain accompanied by gusty wind is likely to occur over Dhaka, Mymensingh, Khulna, Barishal, Chattogram and Sylhet divisions.