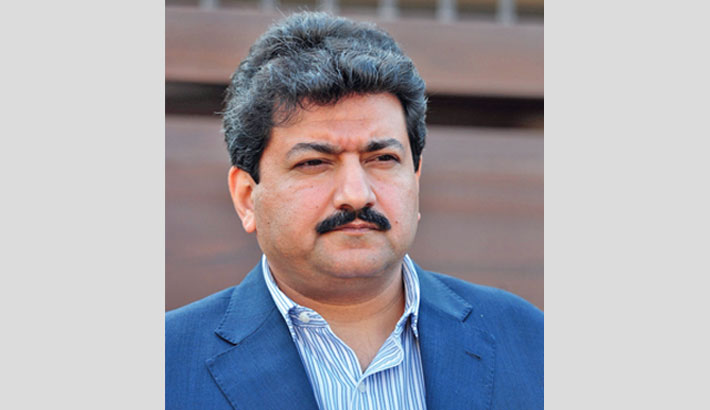 Hamid Mir was taken off air on Monday, just days after he spoke out against the country’s powerful military.

He accused them of censoring the media and persecuting journalists. Critics say journalists in Pakistan are increasingly under threat, although the government denies this. Mir has told the BBC that his wife and daughter have been threatened too.

He told the BBC that on Monday, management told him that he would not be going on air.

Geo News did not give a reason for why he was suspended but confirmed that the veteran journalist would be off air for some time.

News agency Reuters cited unnamed officials at Geo News as confirming that the channel was pressured to act by the military.

The suspension follows comments the TV host made last week.

He was speaking at a protest rally after Asad Ali Toor, another journalist critical of the military, had been attacked in his home by three unidentified men.

Toor says the attackers assaulted him and threatened him about his reporting.

In his speech, Mir called for accountability and said he would identify those responsible for a series of attacks on journalists in Pakistan.

“If you’re breaking into our homes to assault us, well, we cannot enter your homes as you have tanks and guns, but we can make things public, things from inside your homes,” he said.

Amnesty International condemned the “punitive action” taken against Mir, saying that it “severely undermines the responsibility media outlets and authorities have to protect free speech in an already repressive environment”.

Steven Butler of the Committee to Protect Journalists warned the development underscored “the lack of true press freedom in Pakistan”.

The Human Rights Commission of Pakistan “strongly condemned” the suspension of Mir, saying the he should be allowed to resume his job immediately and that the threats against him should be investigated.

Tweeting after his suspension, Mir appeared defiant and unwilling to buckle under pressure.

“I was banned twice in the past. Lost jobs twice. Survived assassination attempts but cannot stop raising voice for the rights given in the constitution. Nothing new for me.”

In 2014, Mr Mir was critically wounded by a gun attack, after his talk show covered alleged rights violations by the military in southwestern Balochistan province.

His attackers have never been identified.

The military has ruled Pakistan for many decades since independence, and although a civilian government led by Imran Khan is currently in power, many say military leaders continue to exercise control.

Critics of the military and the government say there has also been a campaign in recent years to supress dissenting voices in the media.

Both the military and the government deny the allegations.

Local journalist unions however say that since 2018, around 3,000 media workers have lost their jobs.

Pakistan is ranked among the five deadliest countries for journalists to work, according to Reporters Without Borders.

Senior journalist Absar Alam survived a bullet wound after being attacked by an unidentified gunman in Islamabad in April.

In July 2020, another prominent journalist, Matiullah Jan, was abducted by unknown gunmen in police uniforms. He was blindfolded, gagged, bound and assaulted for 12 hours before being released.

Earlier this year, the BBC was forced to stop broadcasting its daily Urdu bulletin due to “interference” in its programme.