‘NID card should be given by ministry concerned’ 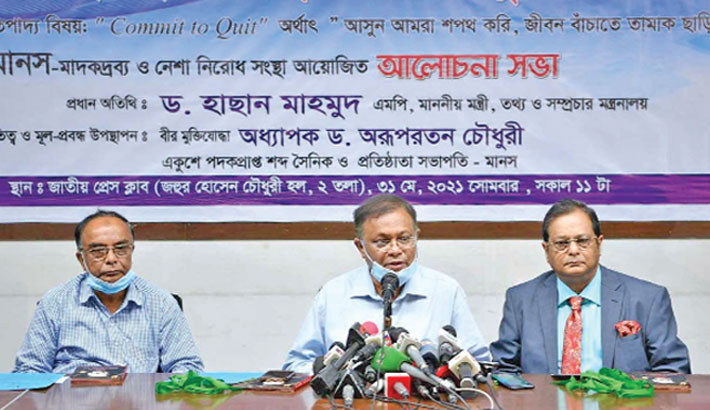 Information Minister Dr Hasan Mahmud speaks at a programme at the National Press Club in the capital on Monday, marking the World No Tobacco Day. — PID PHOTO

Information and Broadcasting Minister Dr Hasan Mahmud on Monday said the authority of issuing National Identity (NID) card should be bestowed upon the  ministry concerned like the other countries in the world.

The minister stated this while replying to a query of newsmen after attending a discussion at Jatiya Press Club in the capital, reports BSS.

Association for the Prevention of Drug Abuse-Bangladesh organised the discussion marking the World No Tobacco Day. This year the theme of the Day is ‘Commit to Quit’.

Hasan said logically it was in the hands of the Election Commission when there was only a project to prepare voter lists in the country.  Now, it should be done by the ministry concerned like other countries of the world as the NID card is being issued, not the voter list, he added.

The minister said the Home Ministry collects all data and information to provide NID card. “The ministry (home) also provides passports at home and abroad. So the decision that has been made on this issue is the same as other countries of the world,” said Hasan, also Awami League joint general secretary.

He said after issuing the NID card, the list of those who are eligible to be voters above 18 years of age must be handed over to the EC. The apprehension raised by the EC is baseless, he added.

Replying to another query over Begum Zia’s health issue, Hasan said the government has taken all steps to provide the highest treatment to Begum Khaleda Zia. The demand for sending her abroad is baseless, he added.

The minister urged the BNP leaders to give thanks to the Prime Minister as she has shown her unprecedented generosity by extending Begum Khaleda Zia's release from jail on humanitarian ground.

The daily Jugantor Editor Saiful Alam and general secretary of the association Ferdows Wahid took part in the programme with its president Professor Dr Arupratan Chowdhury in the chair.