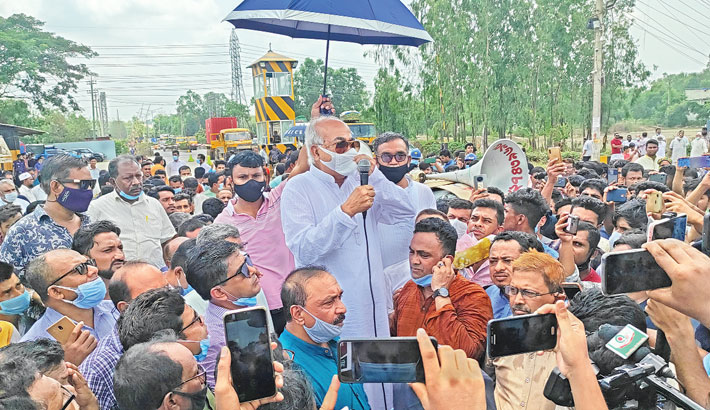 Engineer Mosharraf Hossain, MP, speaks at a human chain in front of BSRM gate at Sonapahar in Mirsharai upazila of Chattogram. – SUN PHOTO

The residents of Mirsharai upazila in Chattogram district have long been facing an acute crisis of safe drinking water.

Many of them are not getting water even after installing deep tube wells.

Later, they realised that they are not getting water as Bangladesh Steel Re-Rolling Mills (BSRM) is extracting groundwater with high capacity deep tube wells.

It prompted local people to register protests against the practice but the BSRM authorities turned a deaf ear to their concerns.

Now, local MP Engineer Mosharraf Hossain has lent his weight to the protests.

The lawmaker has warned that if the mill authorities fail to bring water from the nearby Feni River as per their initial promise, it would be closed for two months. He also gave the authorities an ultimatum to relocate the mill to the economic zone within two years.

He said, “The residents of eight unions and a municipality of the upazila are not getting water as the BSRM has been extracting groundwater by installing 10-12 deep tube wells of high capacity illegally for the last 10 years.”

“The mill would be closed for two months. No raw material will enter the mill,” the ruling party MP added.

He claimed that the BSRM authorities cheated the local people. “They’ve grabbed all the forest land in the area in collusion with the forest officials. Besides, they’ve grabbed a small canal depriving farmers of their due share of water. They’re using electricity from the national grid though they promised to produce own electricity.”

Rezaul Karim Khokon, mayor of Baraiyarhat municipality and convener of the event, said, “If the deep tube wells are not closed, we’ll force the administration to stop all the activities of BSRM as per the decision of our MP.”

Officials of the local administration, including Upazila Nirbahi Officer of Mirsharai Minhajur Rahman and Officer-in-charge of Jorarganj Police Station Nur Hossain Mamun, informed the BSRM authorities of all the demands that came from the human chain.

The UNO said, “We urged the BSRM authorities to implement the demands immediately.”

Tapan Sengupta, deputy managing director of BSRM Group, declined to make any comment about the issue although he said he was aware of the protests.

It was learnt that BSRM, one of the leading steel manufacturing companies, has established two large billet casting plants in Mirsharai.

Though they had promised to use water from the nearby Feni River, they are now extracting groundwater by installing some deep tube wells breaking the promise.

Local people are also dissatisfied with the mill authorities because of their illegal activities like grabbing of forest land and a 1-km long canal that flows round the year and deforestation.