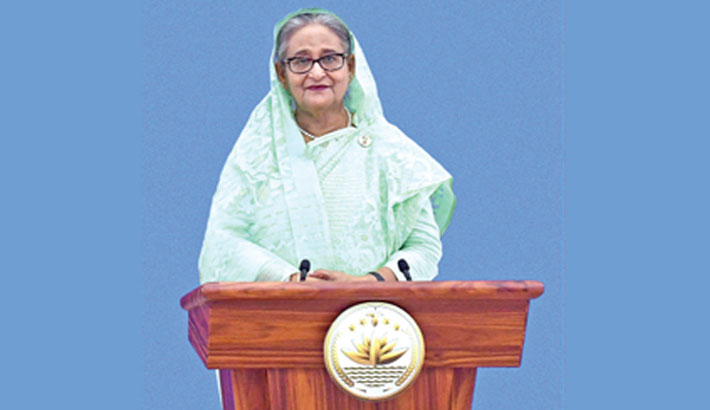 Prime Minister Sheikh Hasina on Sunday called for collective efforts and action-oriented approach for building greener future for the next generation as she placed three suggestions at P4G Summit.

“We, the participating leaders in the P4G Summit, need to work more closely towards a greener future for our next generation, she said.

In her recorded speech broadcast in the ‘Leader’s Session’ of the two-day Second Partnering for Green Growth and Global Goals-P4G Summit held at Seoul, Seoul-T’Ukpyolsi, Republic of Korea from Sunday, reports BSS.

For building greener future, she in her first suggestion said that the P4G needs to campaign more about its action-oriented approach, engaging more financiers, innovators, policymakers and creative entrepreneurs in the five P4G focus areas, and share best practices.

The Prime Minister secondly stressed the need for achieving green growth and global goals 2030, in addition to whole-of-society approach.  As the chair of the Climate Vulnerable Forum-CVF and the host to the South Asian office of Global Centre on Adaptation, Sheikh Hasina said that Bangladesh’s key focus is to uphold the interests of the climate vulnerable countries and promote locally-led adaptation solutions.

The 2021 P4G Seoul Summit is being held on the theme: Inclusive Green Recovery Towards Carbon Neutrality with participation of 60 leaders of the member states and numerous international organisations. The Summit aims to position P4G (Partnering for Green Growth and the Global Goals 2030) as a delivery mechanism to build back better and greener in this decade of actions and will be a stepping-stone to UNFCCC COP 26 and set the pace for the decade of action.

challenges, they have the opportunity to build back better through inclusive green recovery and green growth.

Stating that water, an area of work for P4G, is one of the most valuable assets of Bangladesh, the premier said, “We have adopted a 100-year sustainable development plan styled as Delta Plan 2100 that focuses on efficient use and preservation of water. ” She told the summit that Bangladesh is the first LDC to establish a ‘Climate Change Trust Fund’ from its own resources.

Every year we spend about 5 billion US dollars on climate adaptation and mitigation measures, she mentioned.

The Prime Minister said that Bangladesh, a member of the P4G, pursues a low carbon development path and forecasted, “Our National Solar Energy Action Plan 2021-2041 predicts generation of up to 40 Giga Watt of renewable energy by 2041.”

She also said that Bangladesh, the second largest exporter of ready-made garments, is exploring efficient options of circular fashion and textiles as part of overall circular economy.