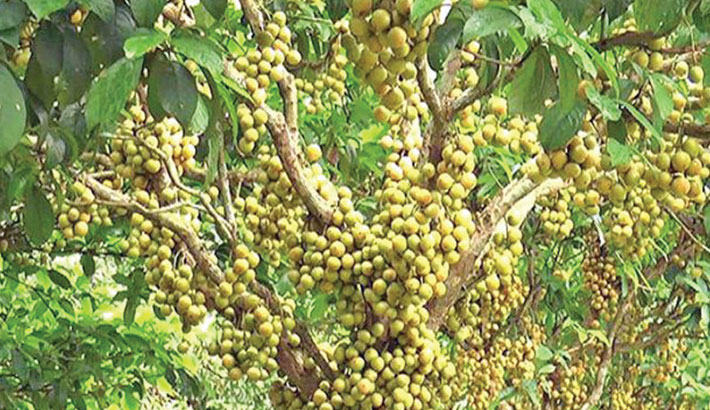 Farmers of Shibpur and Belabo upazilas in Narsingdi district are expecting bumper Lotkan production this year due to favourable climatic conditions.

This season, the climate was very favourable and no natural calamity could touch the popular fruit trees since its flowering stage in the upazilas.

Department of Agriculture Extension (DAE) official sources said Lotkan, the delicious small fruit like litchi, has gained popularity among the people since 1990 as the juicy fruit has more nutritional properties than that of other fruits.

Many people here now have been cultivating Lotkan plants on their homestead gardens due to its economic aspect, the sources added.

Deputy Director of the DAE Shovan Kumar Dhar said that Lotkan sapling is generally growing in high fallow land where scope of other crop cultivation is limited.

“After planting the sapling, the tree blooms within three or four years. Some 100 saplings can be planted on per bigha of land which produce 100 to 120 maunds of Lotkan every year. Each tree bears 30 to 40-kg of fruit every year,” he said.

The juicy fruit has more nutritional properties than that of common fruits. Lotkan has extreme demand because of its nice colour and taste.

A Farmer, Nurul Amin, of Amlabo village under Belabo upazila planted over250 saplings of Lotkan in two bighas of land around 12 years ago that grew well and bloomed more within four years. “I’m getting a good yield of fruits every year,” Amin said.

This year, the trees also bloom more and he is hoping to get more fruits. Harvesting of crops has began from the first week of Bangla month Ashar. Nurul Amin expressed his satisfaction over the production of Lotkan in his orchards.

He hopes that he will start to sell Lotkan within seven days and earn over Taka two to three lakh.

Like Nural Amin, there are a number of farmers in Shibpur and Belabo upazilas of the district changing their fortunes by cultivating Lotkan and leading happy lives.