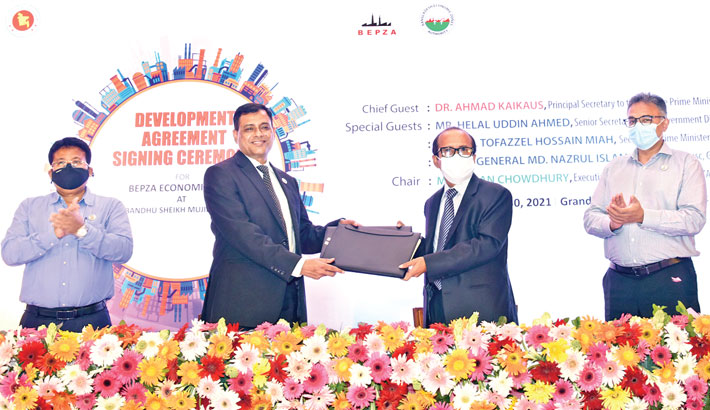 Principal secretary to the prime minister Dr Ahmad Kaikaus was present at the programme as the chief guest while senior secretary of Local Government Division (LGD) Helal Uddin Ahmed was present as special guest.

Sources at BEZA said the economic zone namely “BEPZA Economic Zone” in BSMSN will host around 350-400 industrial units and expecting to bring around $5 billion investment in the zone.

The development work of the BEPZA economic zone began in 2017.

BEZA has handed over around 1,150 acres of land at the BSMSN.

The plots are equipped with adequate road facility, utility services such as water, gas, electricity, telephone, and effluent collection network.

The BEPZA is also developing facilities such as investors’ residence and club.

Speaking on the occasion, BEZA Chairman said Bangladesh has been able to attracting foreign investment even in the time of pandemic. BEZA received around $6 billion worth of investment proposal last year. Expressing his expectation of full-fledged production of a numbers of industries, Paban Chowdhury urged all to work together to make it happen smoothly.

“I firmly believe that BEPZA will bring the highest output from its economic zones like the EPZ,” he said.

The Bangabandhu Sheikh Mujib Shilpa Nagar (BSMSN) is believed to be the largest industrial hub of the country. It is being developed on 30,000 acres of land in three upazilas of Chattogram and Feni.

The government is optimistic about creating of 1.5 million employments there in next 15 years.