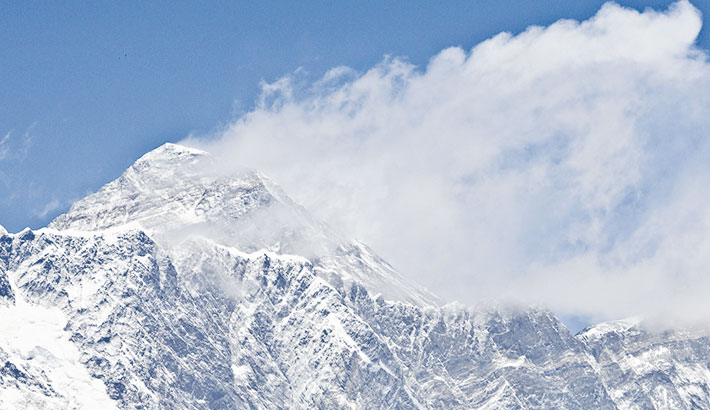 Mount Everest guide Buddhi Bahadur Lama has spent days isolated in a tent after testing positive for coronavirus, as an outbreak that climbers say is putting lives at risk sweeps base camp.

He is one of four in his expedition team thought to have contracted Covid-19 at the foot of the world’s highest mountain, along with a growing number of others. “This is not just our problem, it is happening in most of the teams at the base camp right now,” the 35-year-old told AFP. Dozens of suspected Covid cases have been flown out of the area and at least two companies have cancelled expeditions after team members tested positive.

However authorities in Nepal have yet to acknowledge a single case at the mountain, with the stakes high for the country’s tourism industry after a Covid shutdown last year cost millions in lost revenue.

Lama’s symptoms are mild but he said some climbers were suffering more severely.

The warmer weather that ushers in safer conditions for scaling Everest and other Himalayan peaks has coincided with a new wave of Covid-19 infections in Nepal.

The country is reporting an average of 8,000 cases a day and the health system has been overwhelmed. Over the last two months since the climbing season began, more than 1,000 mountaineers and their mainly Nepali guides have been camped in the tent city.

More than 350 have reached the summit so far this season, but some are still at base camp waiting for the next weather window.

Breathing is already difficult at high altitudes so the coronavirus becomes a major threat if symptoms appear during a climb.

Officials at a camp clinic say more than 30 people have been flown out for health issues in recent weeks. Some have posted their Covid-19 diagnosis on social media.

But the government says it is unaware of any cases.

“We have asked companies and officials to report to us if they have any Covid cases but none has submitted anything yet. We need an official report,” said Nepal’s tourism department chief Rudra Singh Tamang.

“If people have tested positive in Kathmandu, it is hard to say where they got infected.”

There is also a lack of transparency among some expedition organisers about positive cases.

Austrian expedition organiser Lukas Furtenbach, who was the first to cancel an expedition, said he had submitted a report to the government.

“There is an outbreak and there is evidence for that. But the government is denying this outbreak and putting our lives and the lives of their own people, the Sherpas, at risk,” he said.

Last week Furtenbach was waiting to begin his ascent and his team of 19 climbers had already started acclimatisation treks when the virus struck.

One person in the group tested positive with a rapid test kit and the next day three Sherpas also returned positive results.

Eventually, eight in the expedition were found to have Covid-19, with seven confirmed by a PCR test in Kathmandu.

Furtenbach believes they were infected on the mountain—the only time his expedition was in close contact with other teams.

The company has also helped other climbing teams test for the virus and two people have shown positive results.

“If someone dies up there with Covid the families would sue us—when we knew about the outbreak and were still sending people up. This is a liability,” he said.

Nepal suffered a devastating blow to its tourism industry last year when the pandemic forced a complete shutdown of its mountaineering sector.

Without foreign climbers, the Sherpas and other guides—who are often the sole breadwinners for their families—lost their main source of income.

Kunga Sherpa was evacuated from base camp after he tested positive and is now recovering in Kathmandu.

“If we think financially, many need this year’s earnings, but lives are important and perhaps, in a way, it would have been good to not climb this season,” he said.