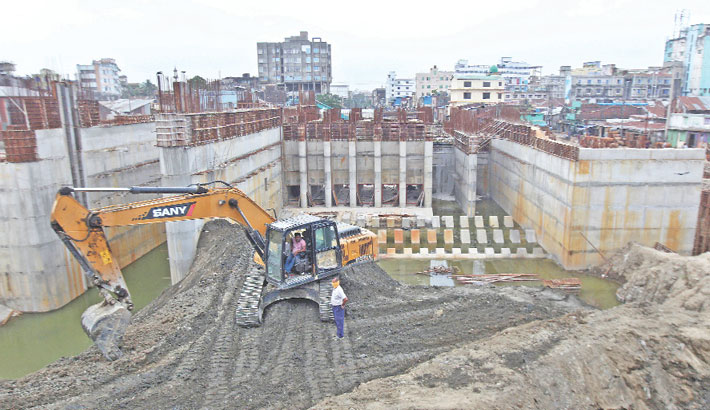 A sluice gate is being constructed in Chaktai canal of Chattogram city under a mega project to solve the city’s waterlogging problem. As the canal remains blocked due to the construction work, the waterlogging situation may worsen in the upcoming rainy season. The photo was taken from Chaktai area on Saturday. —Rabin chowdhury

CHATTOGRAM: Despite the completion of over 50 percent work of the mega project taken to address the longstanding waterlogging crisis in the port city, city-dwellers are likely to experience sufferings in the upcoming rainy season.

Sources said the waterlogging situation may worsen as a number of canals were kept blocked for installing sluice gates and excavation and expansion works under the mega project.

It will prevent easy flow of water through canals during the rainy season, which will cause waterlogging in different parts of the city, they said.

Work of the project couldn’t be carried out with due pace for different reasons including complexities over land acquisition and sufficient fund release, changes in DPP and delay in bringing machineries from abroad.

Mentionable, many low-lying areas of the city have already experienced waterlogging during high tide and tidal surges under the influence of cyclone Yaas.

The Executive Committee of the National Economic Council (ECNEC) approved the mega project titled ‘Canal re-excavation, expansion, renovation and development for addressing the waterlogging in the Chattogram city’ involving Tk 5,616 crore on August 9 in 2017.

The CDA and Bangladesh Army signed a memorandum of understanding for implementing the project on April 9 in 2018.

The army started work of the project formally with removing soil and garbage from the Chashma Khal (canal) in the city’s Sholoshahar Gate No-2 area on April 28 of the same year.

The project works include re-excavation, expansion and development of 36 canals connected to each other and the river Karnaphuli, construction of 176 kilometers retaining wall, 200 cross-drain culverts, replacement of 48 PC guarder bridges and six RCC culverts, installation of five tidal regulators and 12 pump houses.

Although the deadline for the project was expired in June 2020, it got extended till June this year. The implementing authority will seek two more years for completion of the works, said the sources concerned.

The engineering core of the Bangladesh Army has been working to clean up the city's drains and canals, construct retaining walls and roads on the both sides of the drains and canals, demolish old bridges to increase height, install regulators and evict illegal occupants from canal banks since the beginning of the project work.

CDA officials concerned said they couldn’t complete the works within deadline as they couldn’t import important machineries from Netherlands to construct the sluice gates due to Covid-19 pandemic.

Besides, they got only around Tk 2,000 crore out of total Tk 5,616 crore crore released for the project till now.

Complexities also arose centring the price of the acquired land, they said.

A total of 6,516 kathas of land will be acquired for the project to construct water-bodies, retain walls and roads beside the canals.

Besides, sources also alleged that there is lack of coordination between Chattogram City Corporation (CCC) and other organisations with the CDA in implementing the project.

Urban Planner and Architect Ashiq Imran told the daily sun that it is a tough job to implement the project demolishing the illegal structures and cleaning up the canals.

The implementing agency should have completed the work of constructing sluice gates before the monsoon, but they couldn’t do it due to the pandemic situation, he said.

The city dwellers will also have to suffer in this rainy season for the situation, he observed.

“The authority should develop passage for draining out of water quickly or complete the unfinished works engaging additional manpower,” suggested the architect.

Ashiq also laid emphasis on coordination among the agencies like CDA, CCC and Cwasa.

Contacted, Project Director (PD) Lieutenant Colonel Shah Ali of the Bangladesh Army said they have completed 51 per cent works to reduce the problems as early as possible.

The work even didn’t stop amid the pandemic, he said.

“We have installed pipes in some canals for draining out of the water. But, those will not be able to withstand the huge pressure during heavy rainfall,” said Ali.

It will take some one more months to get the canal works done, he said.

“The obstructions at the canal mouths will be removed before the rainy season to ensure easy flow of water,” said the officer.

Lack of some important machineries to be imported from abroad, complexities over land acquisition and times to demolish illegal structures are the main reasons behind the delay, he added.

Putting up non-cooperation of the CCC, he said CDA wanted to hand over the canals to the CCC immediate after works, but they didn’t respond to the call.

It will be tough for the CDA to maintain those canals till the end of the project, said the chief engineer.

"We have already removed some obstructions to help reduce waterlogging in this monsoon", he said.