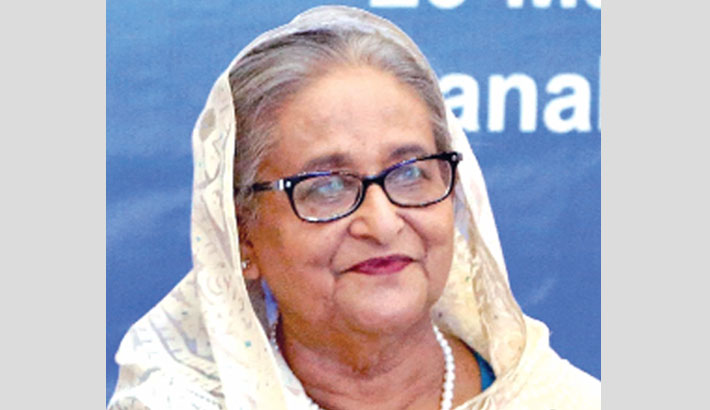 Prime Minister Sheikh Hasina on Saturday said Bangladesh is always ready to work under the United Nations Security Council in establishing peace in any place across the globe.

“I want to inform the United Nations clearly that we are always ready for establishing peace in any corner across the world under the Security Council,” she said.

The premier was addressing the ceremony of International Day of United Nations Peacekeepers-2021 as the chief guest at Senakunja, joining virtually from her official residence Ganabhaban, reports BSS.

Referring to the day’s theme “The road to a lasting peace: Leveraging the power of youth for peace and security” she said, “We want to develop the young and youth forces as one of the key elements in establishing world peace.”

She continued “Our young society would learn that peace is the only path of development, peace is the path of security and peace is the way of people’s welfare and we want that everyone could follow this path and develop themselves.”

Sheikh Hasina said her belief is that young members of Bangladesh Armed Forces and Police remained ready to face the challenges to establish world peace in the twenty-first century.

The prime minister also interacted with the peacekeepers at various places across the globe through video conference.

She also unveiled a souvenir on Bangabandhu’s Birth Centenary and UN Peacekeepers Journal.

At the beginning of the programme, one minute of silence was observed to show respect to the peacekeepers who sacrificed their lives for establishing peace across the globe.

A short video documentary on Bangladesh’s peacekeeping missions in the world was screened at the ceremony.

Besides, State Minister for Foreign Affairs Md. Shahriar Alam, Chief of Naval Staff, Chief of Air Staff and Inspector General of Police, among others, were present at Senakunja.

The prime minister said Bangladesh maintains friendship with all as the government wants to turn the country into a developed and prosperous one.

“We want to build Bangladesh as a developed and prosperous country and to this end, Bangladesh has to step forward keeping friendship with all,” she said.

She said the government’s main task is to improve the economic condition of the country’s people, remove poverty, ensure education, healthcare and employment for the future generations.

In this regard, the government is working rigorously, she added.

Recalling the important role of Bangladeshi Peacekeepers proudly on the UN Peacekeepers day, the prime minister said the country is celebrating the glory of 33 years as the highest peacekeepers’ sending nation in establishing world peace.

She said at this moment, 6,742 Bangladeshi peacekeepers among a total of 80,184 peacekeepers of 122 countries have engaged in establishing world peace which is 8.40 percent of the total and the number is glorious for the nation.

In addition, 284 women peacekeepers from Bangladesh are also deployed in world peacekeeping missions, she added.

Sheikh Hasina went on saying that the government has provided an expensive internet through V-Sat so the Bangladeshi peacekeepers deployed in remote and hard-to-reach areas in different countries could communicate with their family members.

She continued that LAV Ambulance, IED Jammer along with Mine-Resistant Ambush Protected Vehicle (MRAP) have been incorporated to the contingents for ensuring security of Bangladeshi peacekeepers.

The premier said those who are in peacekeeping missions are brightening the image of Bangladesh.

“Actually it (peacekeeping) is a challenging job where bravery and sincerity are needed. You (Bangladeshi peacekeepers) are doing it successfully,” she said, mentioning that many countries don’t want to join it.

She said Bangladeshi peacekeepers are contributing to the most conflicting and difficult places across the world overcoming all barriers.

Sheikh Hasina said steps have been taken to develop Bangladesh’s peacekeepers as the most qualified through providing them with time befitting training, improved technology and equipment to face the new challenges.

She urged the peacekeepers of Bangladesh Army, Navy, Air Force and Police to accomplish their responsibilities with utmost professionalism, honesty, integrity and sincerity.

Talking about the ongoing Covid-19 pandemic, Sheikh Hasina told the Bangladeshi peacekeepers that the virus outbreak is causing huge suffering to the people so any situation has to be tackled slowly and calmly because it creates uncertainty in almost every country.

“We believe in peace and this culture of peace has to be kept in mind always,” she said.

Taking the office again in 2009, Awami League government formulated “Forces Goal-2030” and is now implementing it for highly professional and trained armed forces alongside establishing Bangladesh Peace Building Centre (BPC) in 2016, she said.

Sheikh Hasina said the government moreover developed and modernized all other forces such as police, BGB, RAB, Ansar etc.