He gets 100pc votes in the club election 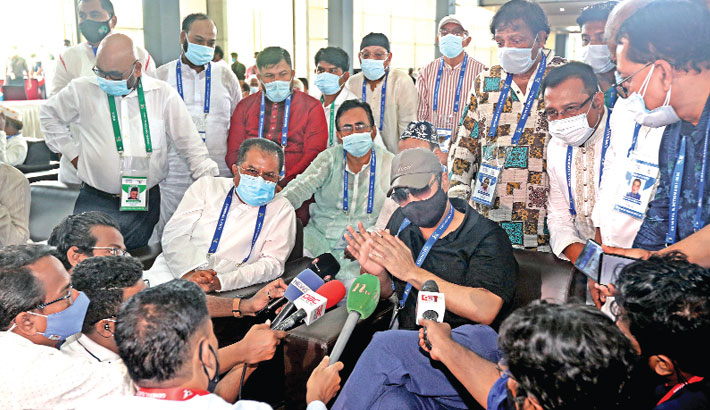 Sheikh Russel Krira Chakra Limited Chairman and Bashundhara Group Managing Director Sayem Sobhan Anvir said that he will build up a club cricket team that will enter into the country’s domestic cricket soon.

“I’ve announced many days ago that I will build up a cricket team in Sk Russel. Unfortunately, we've lagged behind due to the Covid-19 situation. We were unable to hold an in-person meeting or take any initiative regarding the plan due to the outbreak. But as I've made a commitment, I will keep my word,” Sayem Sobhan told the reporters after the club elections at the International Convention City in Bashundhara on Saturday.

“As an established club, we want to take part in the country’s other sports. Three or four months ago, we announced that we will enter into cricket. But the Covid-19 situation became worse again. I’ve announced, Sk Russel will obviously enter into cricket,” he added.

Sayem Sobhan won the polls with a 100 percent vote and became the first director of the 30-member board in the maiden election (2021-2024) of Sk Russel.

The directors have been elected for the next four years 2021-2024. The board will now select the chairman, a senior vice-president, two vice-chairmen, a director in-charge, a finance director and a sports director.

Sayem Sobhan, who came to the polling centre to cast his vote, further said that he had a plan to build up a football academy and a playground for Sk Russel.

“We’ve also promised to build up a football academy and a playground. But when we started to work on our plans, the pandemic stopped us last year. I believe Sk Russel will regain their lost glory again. I don’t play football on the field but I will do everything for the success of the club,” he said.

The country’s prominent sports organiser also urged other football clubs and corporate companies to step forward for the development of football.

“We all can see that Bangladesh are lagging behind in football. However, we are moving forward slowly. In future, football will also become popular like cricket. Everything will happen gradually.

“Everyone should step forward to patronise football. The world’s most popular sport is football, not cricket. But I don't know why football is suffering so much negligence in Bangladesh. I think there is so much scope to develop in this sport. We, Bashundhara Group, have established a sports complex. There are many big clubs, big groups here. I think they should also come forward and build up academies for the development of the country’s football,” he added

The voting contest was held from 09:30am to 12:30pm. Bangladesh Football Federation first vice-president and Bashundhara Kings President Imrul Hassan was the chief election commissioner while BFF general secretary Abu Nayeem Shohag and representatives from other premier league clubs were also present there as observers.

A total of 88 out of 98 voters exercised their votes to elect a 30-member board of directors from 60 candidates. Four out of 88 votes were null and void.