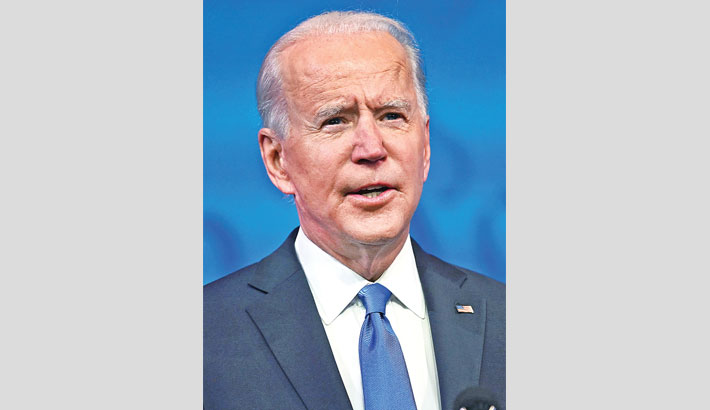 WASHINGTON: US President Joe Biden’s administration announced on Friday it will not return to the Open Skies Treaty, which Donald Trump withdrew from, signaling a toughening stance against Russia, reports AFP.

The post-Cold War treaty was meant to foster trust by allowing the two powers and their allies to monitor one another’s airspace, but Trump left the pact in November citing Russian violations.

Biden, who has said he is open to working with Russia on some international security issues, ruled out a return to the treaty in the run-up to his summit with Russian President Vladimir Putin on June 16 in Geneva. “The United States regrets that the Treaty on Open Skies has been undermined by Russia’s violations,” a State Department spokesman said. “In concluding its review of the treaty, the United States therefore does not intend to seek to rejoin it, given Russia’s failure to take any actions to return to compliance.”

Moscow announced in January it would leave the treaty, saying there was no progress in making it work in light of Trump’s withdrawal. Russian lawmakers on May 19 voted to uphold Moscow’s exit, but Putin’s government said it was still prepared to honor the deal if the Americans proposed a “constructive solution.”

Open Skies was signed soon after the dissolution of the Soviet Union in 1992 and came into force in 2002.

The treaty allowed its nearly three dozen signatories to carry out short-notice flights over one another’s territory to monitor potential military operations.

Members include countries across Europe, the former Soviet Union and Canada. Moscow and Washington had long accused each other of breaching the terms of the Open Skies agreement, and Trump was reportedly outraged by a Russian flight over his New Jersey golf course.

Biden has wavered over the treaty and, in May 2020, castigated Trump for his plan to pull out, saying the then-president had “doubled down on his short-sighted policy of going it alone and abandoning American leadership.”

At the time, Biden acknowledged Russian violations but said they should be addressed by “seeking to resolve them through the treaty’s implementation and dispute mechanism.”

The pact allows its members to request copies of images taken during surveillance flights carried out by other members.

The country under surveillance is given 72 hours’ warning ahead of a flight and 24 hours’ notice of the flight path, to which it can suggest modifications.

Since taking office, Biden has been more open to international accords after Trump dumped a slew of agreements—moving swiftly to rejoin the Paris climate accord, to resume support for the World Health Organization, and to rejoin the Iran nuclear deal.

Regarding other accords linking the United with Russia however Biden has appeared to blow hot and cold—having assumed the presidency vowing a firmer line towards Moscow.

The Open Skies pact was one of several major treaties Washington abandoned under Trump.

He also pulled out from the Intermediate-Range Nuclear Forces Treaty with Russia, further straining already tense relations between Moscow and Washington that have reached their lowest point since the end of the Cold War.

Biden has imposed new sanctions against Moscow over what US authorities say was the Russian role in the massive SolarWinds cyberattack and meddling in the 2020 presidential election.

In addition, Washington has harshly criticized Moscow for the near-death poisoning and subsequent imprisonment of one of the last open opponents to Putin, Alexei Navalny.

Tensions are also high over Ukraine, where Russia already controls swaths of territory and recently massed troops on the border in a new show of force.

Another focus is on Russian-dominated Belarus, which caused an uproar this week after authorities forced an airliner passing overhead to land, then arrested an opponent to President Alexander Lukashenko who had been aboard.

Yet Moscow welcomed—and Biden was criticized for—a decision to waive sanctions holding up completion of the Nord Stream 2 natural gas pipeline which US officials worry will make the European Union overdependent on the Russians.

And the first meeting between US Secretary of State Antony Blinken and his Russian counterpart Sergei Lavrov took place in a fence-mending atmosphere.

In that context, drawing a line under Open Skies is a way of reasserting Biden’s initial message of firmness.

“Russia’s behavior, including its recent actions with respect to Ukraine, is not that of a partner committed to confidence-building,” the State Department spokesman said Friday.