No decision yet to scrap 13 coal-fired plants 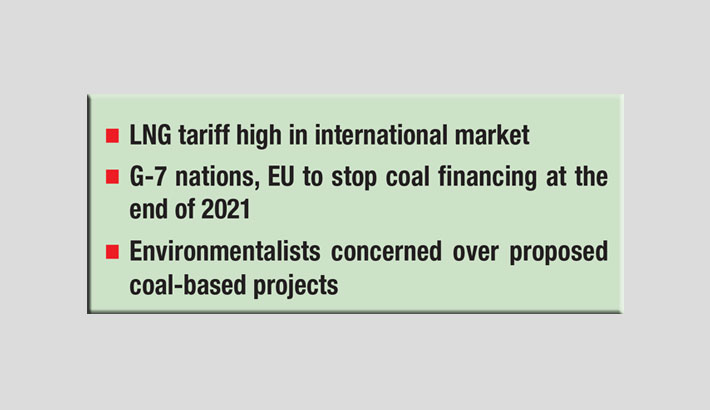 The government has not decided yet if it should abandon 13 coal-fired power plants as the LNG tariff is increasing steeply in the international market.

The government has taken 17 coal-fired power projects to generate around 17,000 megawatt of electricity by 2030 when the country’s electricity demand will reach 34,000 MW.

According to the official sources, State Minister for Power and Energy Nasrul Hamid sought to scrap the projects as pressures mounted on funding for implementing the projects.

Besides, Power Secretary Md Habibur Rahman favour continuing implementation of the projects as the LNG tariff in the international market rose significantly.

According to the Rupantarita Pakratik Gas Company Ltd (RPGCL), Bangladesh purchased per mmbtu LNG at $3.8 from the spot market in September 2020, which now jumped to $10.18.

If the tariff hike will continue, Bangladesh may face trouble in balance of payment, which will push up the government’s subsidy in the coming fiscal year, an official of the RPGCL told the daily sun.

Besides, Group of Seven (G7) nations, along with several other European Union nations, have already committed to stop international financing for the coal-based power projects by the end of this year.

Once the meeting will okay to scrap the 13 coal-fired proposed plants, the electricity generation plan from coal-based plants will come down to only 6,079 MW from the existing plan of 16,952 MW, officials said.

The Power Division will also require PMO approval in this regard.

“I don’t understand why the government has allowed implementing the coal-fired plants at a location where there is no facility for coal transportation,” said an official on the condition of anonymity.

“It also brought more difficulties in implementing the projects. Both the bureaucrats and policymakers are responsible for it,” the official added.

He said the government might need to pay compensation to those private power producers for scrapping the projects.

A series of studies recently warned that the adverse impacts of the existing and under-construction coal-fired power could end up causing the deaths of around 71,000 people throughout their lifespan in the next 30 years, mainly due to air pollution, toxic deposition and other environmental hazards.

The studies were conducted by the Centre for Research on Energy and Clean Air (CREA) with the support of Bangladesh Poribesh Andolon (BAPA)  CREA conducted the studies on eight proposed coal-fired power projects in greater Chattogram in September 2020, the newly constructed Payra coal-fired thermal power project, and proposed plants in greater Barisal in May 2020 and Rampal Power Project.

Bangladesh must chalk out transition to renewable energy in its new energy master plan towards zero carbon goals, said the Institute for Energy Economics and Financial Analysis (IEEFA) in its latest report. The author of the report and energy finance analyst Simon Nicholas said the upcoming Integrated Energy and Electricity Master Plan (IEEMP), if aligned to the government’s new five-year plan, will abandon coal and increased LNG commitment in favour of cheaper low emission renewables.

He added, “If JICA funds coal power and creates a plan for more high-cost LNG-fired capacity it will be worsening overcapacity and increasing the likelihood of power tariff increases for consumers.”

The 8FYP notes that the cost of power in Bangladesh rose 41 percent between FY2015 and FY2020 due to the increased use of oil and diesel in the power system’s fuel mix over the period.