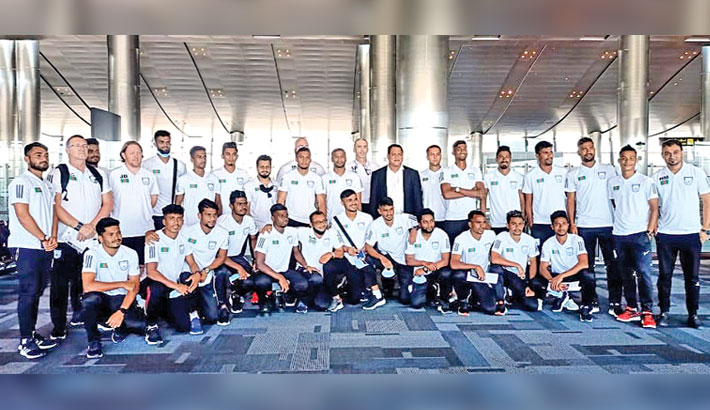 Bangladesh national football team players and officials pose for a photo after landing at Doha in Qatar on Friday. BFF PHOTO

A 32-member Bangladesh national football team, including 23 players and 9 officials, safely reached Qatari capital Doha on Friday at 1:10pm after ending all dramas.

The men in red and green will play three matches of FIFA, AFC joint qualifiers against Afghanistan on June 3, India on June 7 and Oman on June 15.

Forward Mahbubur Rahman Sufil and midfielder Mohammed Ibrahim didn’t fly with the team as they are yet to recover from COVID-19. Bangladesh Football Federation didn't reveal Sufil's report due to the AFC's health guideline regarding COVID-19.

“We need to play extremely well if we want to gain any points against them. In the next seven days, we will get the players ready for the first game,” head coach Jamie Day told the reporters before leaving Dhaka.

Captain Jamal Bhuyan and veteran defender Tapu Barman asked for blessings from everyone for a successful campaign.

However, the national team started their training camp in Dhaka on May 16. Earlier on Thursday, Bangladesh national football team played a 2-2 draw against Sheikh Jamal Dhanmondi Club Ltd in their solitary practice game at the Bangabandhu National Stadium.