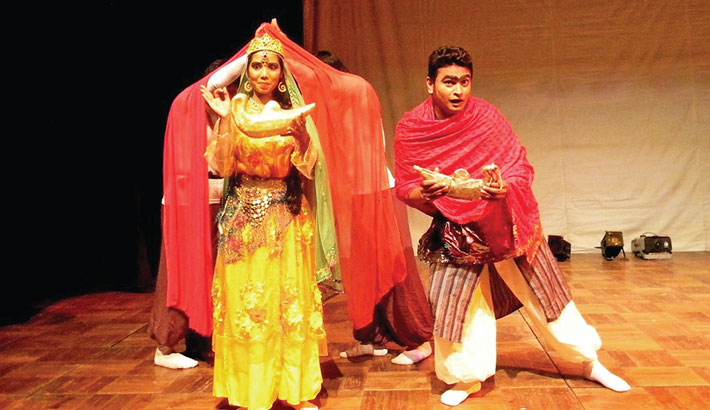 A scene from Jadur Pradip

Theatre troupe Swapnadal will stage its ‘mimodrama’ production ‘Jadur Pradip’ (The Magic Lamp) at the International Theatre Festival Online tomorrow. The play will be shown in the first phase of ‘5th Rangoutsab 21-22’ on the Facebook and YouTube channel of Naihati Rangasena at 9:00pm.

Naihati Rangasena, an Indian theatre organisation has arranged the festival. There will also be a live discussion ‘Meet the Director’ with the play’s director Zahid Repon, to be held at 8:30pm before the show.

Adapted and directed by Zahid Repon, ‘Jadur Pradip’ is based on the familiar fairy tale, ‘Aladdin and the Magic Lamp’. This is a Middle Eastern folk tale in the ‘Book of One Thousand and One Nights’ (The Arabian Nights).

Mimodrama is a play or drama in which action is carried on in dumb-show. The worldwide acclaim of mimodrama came in the 1950s production of Marcel Marceau that he adapted from Nikolay Gogol’s short story ‘Overcoat’.

Generally the whole story is played out through facial expression and body movement in mimodrama.

It is a very promising performing art but one that is neglected in Bangladesh. Only a handful mimodrama production has been made in the country.

Aladdin and his magic lamp, where a magic lamp helps one simple boy get a hold of the prince is a very popular story around the world. Swapnadal has rewritten and recreated the whole story in order to put it as a mimodrama.

The central message of the production is the triumph of good over evil.