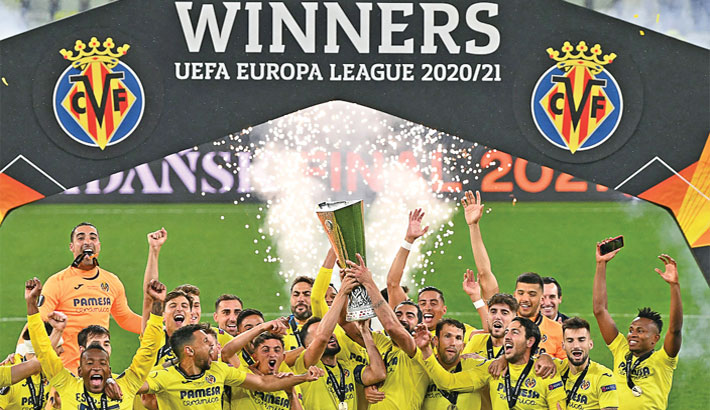 Villarreal defeated Manchester United 11-10 on penalties to win their first major trophy after a 1-1 draw in the Europa League final as goalkeeper David de Gea missed the decisive spot-kick in a remarkable shootout.

"It feels really good. It's been a tough competition. To play against a very good side like Manchester United, we knew it would be tough," Villarreal midfielder Francis Coquelin told BT Sport.

"We didn't manage to get to the Champions League through the league so to get it through the Europa League is something special -- and a first title for the club as well -- something amazing."

Dani Parejo swung in a free-kick from the left and Moreno peeled away from Luke Shaw and Victor Lindelof, steering beyond De Gea as the Swede desperately tugged at his shirt.

A headed clearance at a corner dropped to Rashford, whose dragged volley ricocheted into the path of Cavani to stab home with Rulli unable to recover after anticipating the initial shot.

It was the Uruguayan's sixth goal of the competition this season, all coming in his past four matches, and one that handed United the momentum.

The first 21 penalties were successfully converted before De Gea had his attempt palmed away by Rulli as United lost for the sixth time in seven shootouts, handing Emery a record fourth Europa League crown.