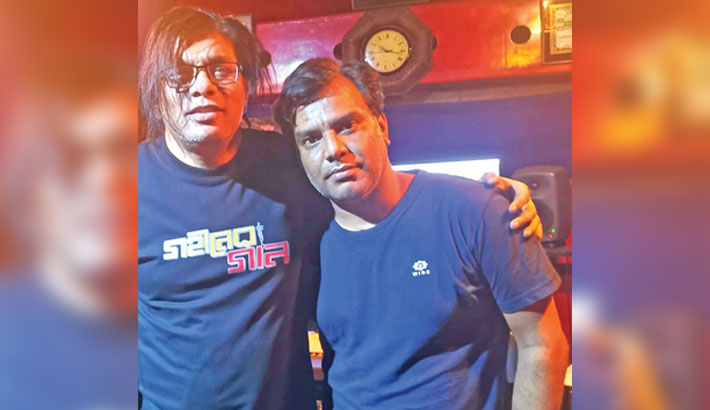 The music album ‘Ekta Chador Hobe’ was released in 2002. Sung by Janes Sumon, the title song of the album got huge popularity among music lovers at that time.

Ethun Babu was the lyricist and composer of 12 songs of ‘Ekta Chador Hobe’. The success behind the album was Babu’s unique lyrics, composition and singing style of Janes Sumon.

After a long hiatus the singer-musician duo has collaborated again in a new song titled ‘Ator Golap Jol’. The track has been released on the YouTube channel of EB Music recently. After its release the song has been getting appreciation from the listeners.

About the song, Ethun Babu said, “After a long hiatus I have penned and composed song for Sumon. The lyrics of the song are based on the ongoing violence in Palestine. Sumon has sung the song wholeheartedly. I hope the audience will also enjoy the single.”

Janes Sumon said, “I’m very happy that I have collaborated with Babu bhai again. He has written the lyrics with utmost care and I’ve tried my level best to sing the song perfectly. Now, the audience will judge it.”

Ethun Babu is a popular lyricist and musician of the country. He is the musician of many hit songs, including ‘O Priya Tumi Kothay’, ‘Ghum Ashena’ and ‘Maya Doya Nai Bondhur’.

Galib Ahsan Mehedi, popularly known as Janes Sumon is a pop singer of the 90s. His first music album ‘Ashirbad’ was released in 1997. He came to the limelight through the song ‘Ekta Chador Hobe’ in 2002. He has sung over 3 hundred songs. Sumon’s last album ‘Mon Cholo Rupnogore’ was released in 2008.