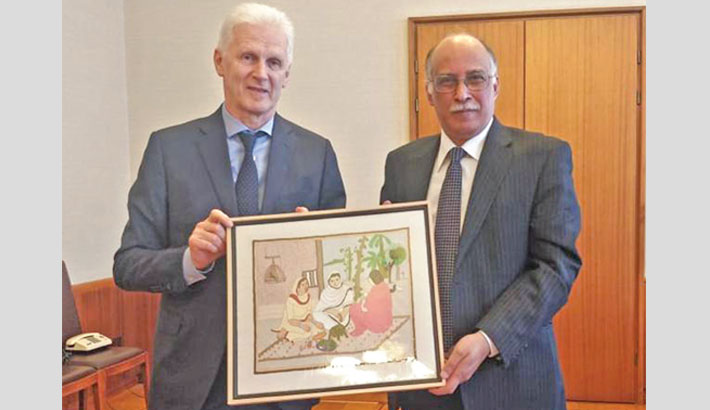 Bangladesh Ambassador to Russia Kamrul Ahsan presents a souvenir to Andrey Fursenko, Aide to the President of Russian Federation during a meeting in Moscow on Wednesday.

Russia has assured Bangladesh of providing all necessary assistances for the implementation of the Rooppur Nuclear Power Plant (RNPP) project within the scheduled time.

This was stated by Andrey Fursenko, Aide to the President of the Russian Federation, during a meeting with Bangladesh Ambassador in Moscow Kamrul Ahsan on Wednesday.

Conveying the gratitude of the Bangladesh government for all-out support by the Russian Federation for the ongoing construction of the Rooppur Nuclear Power Plant (RNPP) in Bangladesh, Kamrul Ahsan briefed Fursenko on the progress of the project work.  Before joining in his new position, Fursenko served as the Minister of Education and Science of the Russian Federation. The meeting discussed a whole gamut of bilateral issues and issues of mutual interests between Bangladesh and Russia, expressing a firm hope to strengthen the relations between the two friendly countries in the days ahead.

At the outset of the discussion, Ambassador Kamrul Ahsan reaffirmed the assurance of Prime Minister of Bangladesh Sheikh Hasina to deepen the already existing friendly and historic relation between the two nations.  He recalled the outright support of Russia during Bangladesh’s war of independence. The meeting also discussed different bilateral and mutually intertwined issues between the two nations, including relevant regional and international issues of common interest.

Bangladesh envoy sought cooperation from Russia in different political and economic issues. Fursenko assured that he would duly convey the matters to relevant bodies to provide necessary cooperation.

He reaffirmed that they would closely work with Bangladesh on the mutually beneficial affairs. He cited Bangladesh as an important partner and ally to Russia.

Bangladesh Ambassador also requested assistance of the Aide to President Putin on early repatriation of the forcibly displaced Rohingya people to Rakhine of Myanmar with full dignity, civil and economic rights.

The meeting described as “fruitful and friendly” also discussed issues like expansion of trade and commerce; mutual exchange in education, science and technology; expansion of bilateral connectivity; joint actions to fight against the global pandemic COVID-19 and high-level visits of the leaderships between the two countries. The officials concerned from both sides were also present at the meeting.