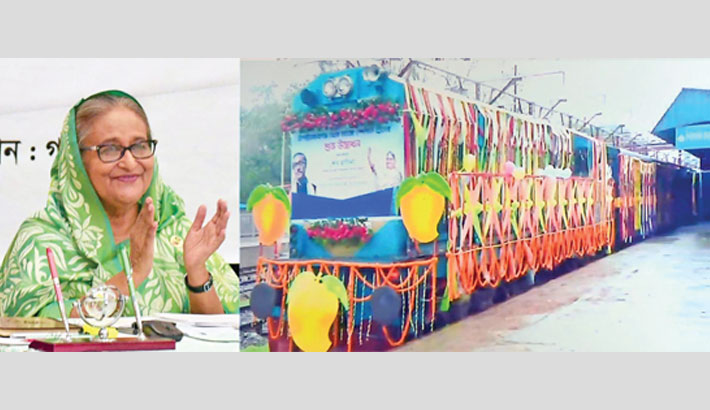 Prime Minister Sheikh Hasina inaugurates a ‘special mango train’ on Chapainawabganj-Dhaka route via Rajshahi in order to transport mangoes at lower cost through a virtual platform from her official residence Ganabhaban in the capital on Thursday.

She opened the special train service through a virtual platform from her official residence Ganabhaban.

The West Zone of Bangladesh Railway has taken the initiative to transport mangoes at a lower cost for the welfare of mango farmers and traders amid the Covid-19 situation, reports UNB.

The train, having the capacity of 150 metric tonnes (MT) in its five wagons, will depart Chapainawabganj for Dhaka via Rajshahi every day and the transport cost is up to Tk 1.3 per kg and Tk 1,300 per MT mango.

The train will have stoppage for loading mangoes at 14 stations on the Chapainawabganj-Dhaka railway route. The train may make stoppages at other stations based on parcel booking and unloading.

In the function, the Prime Minister also virtually laid the foundation stone of Madhukhali (Faridpur)-Kamarkhali-Magura New Rail Line Construction Project. Bangladesh Railway is implementing the project to build the 24.80 km broad-gauge track at the estimated cost of Tk 1,202 crore within 18 months.

Addressing the function, the Prime Minister said the government has been working to expand rail networks throughout the country.  “We’re bringing the whole Bangladesh under the railway network,” she said.

Besides, the rail connectivity with neighbouring India on different routes, which remained suspended after the 1965 war, is now  being restored and the connectivity on some routes has already been resumed, she said. She said that there is a plan to extend the railway connectivity to Siliguri, India. Talking about the Madhukhali-Kamarkhali- Magura  Rail Line, the PM said the people of Magura will be benefited from the rail connectivity in a larger way once the construction of Padma Bridge is completed. She directed the authorities concerned to expand the new rail line to Kushtia and Meherpur districts Railways Minister Md Nurul Islam Sujan presided over the function joining the function from Magura. PM’s Principal Secretary Dr Ahmad Kaikaus conducted the event while Railways Secretary Md Salim Reza delivered the welcome speech.