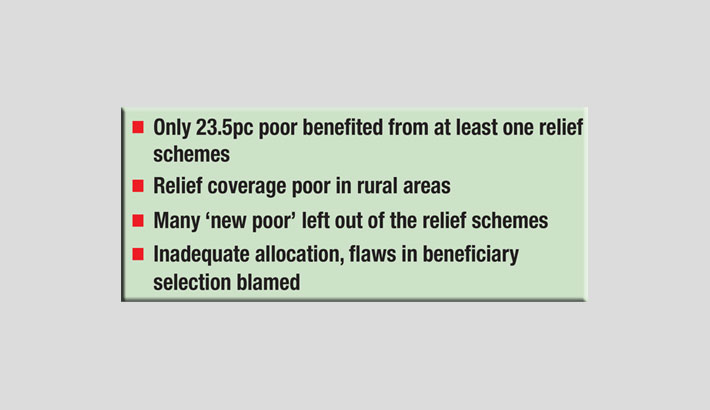 Some 76.6 per cent of the poorest population was left out of the three Covid-19 relief programmes mainly thanks to inadequate allocation and poor beneficiary selection process, suggests a survey.

The survey report unveiled on Thursday by the Centre for Policy Dialogue (CPD) reveals that only 23.5 of the poorest people received some forms of support from at least one of the three relief programmes.

CPD found flaws in the selection process, terming it as an ‘inclusion error.’ About 44 per cent of beneficiaries who received at least one of the three relief packages belong to the highest two income quartiles.

Tk 2,500 cash support for five million people went to 34.6 per cent of the 1st quartile income group while 64.4 per cent recipients were from the higher income quartiles.

Some 35.4 per cent poorest quartile received GR (cash) relief while the number was 33 per cent in case of GR (rice) relief.

Relief coverage in rural areas was much lower compared to urban areas as only 18.9 per cent of the rural poor received support from at least one of the three SSNPs, while the coverage was 43.3 per cent among the urban poor.

The qualitative survey findings indicate that allocation of GR (rice) and GR (cash) has been made based on population size rather than poverty rate scenario in the selected localities. The primary reason for low coverage was inadequate relief allocation. At least a 50 per cent shortage in food relief was found compared to the demand.

A large number of workers in the informal sector was left out of the relief programmes.

Many of the ‘new poor’ were excluded from the three relief packages. Among the respondents whose income has reduced because of the pandemic, 77.3 per cent did not receive GR (rice), GR (cash) and cash support.

At least 44 per cent of beneficiaries of the three SSNPs complained about a lack of transparency in the selection process.

The survey was conducted between late January and early February 2021 on 2,600 households.

Centre for Policy Dialogue (CPD) and Oxfam in Bangladesh in association with Citizen’s Platform for SDGs, Bangladesh organized a virtual dialogue titled “Relief Supports to Cope with COVID-19: How Effective Were They?” to reveal the study findings.

Dissemination of relief information with regards to hotline numbers was highly inadequate. Only 1.6 per cent of beneficiaries were aware of the hotline numbers associated with the relief programmes.

Over 90 per cent of the GR (rice) and GR (cash) beneficiaries had to bear the costs involved in travelling to reach distant relief centres for collecting relief supports.

Surprisingly, 17 per cent of the cash support beneficiaries had mentioned that they had to incur transportation cost even though the cash transfer was provided through mobile banking.

“Higher allocation, both in terms of coverage and the amount of support provided to the affected population, is necessary in any emergency such as the ongoing pandemic,” Prof Mustafizur Rahman, Distinguished Fellow of CPD, said while presenting the keynote paper.

Higher unemployment, income erosion, switching to new jobs with lower pay and new dimensions of vulnerability such as the emergence of ‘new poor’ during COVID type emergencies, should guide both beneficiary selection and allocation, he noted.

Dr Debapriya Bhattacharya, CPD’s Distinguished Fellow and Convenor of Citizen’s Platform for SDGs, Bangladesh saw a lack of government and private initiatives to tackle the second wave of the COVID-19 pandemic.

“To distribute the relief to the ones actually in need, mass awareness and transparency is a must,” he said.

Dr Bhattacharya also stated that community-based organisations (CBOs), NGOs, media should work together with the government agencies to ensure transparency, accountability and monitoring in relief distribution.

Disaster Management and Relief Minister Dr Md. Enamur Rahman claimed that relief supports are being distributed and there are no complaints of people suffering from hunger.  He assured that more emphasis will be given on making the relief distribution process more transparent. AB Tajul Islam MP Chairman, Parliamentary Standing Committee on Ministry of Disaster Management & Relief, commented that both service providers and recipients need to take a high moral ground so that it becomes possible to distribute the relief supports to the most deserving.

Another ruling party lawmaker Barrister Shameem Haider Patwary recommended that the relief distribution should be based on the poverty scenario of each district. He favoured cash support instead of other modes of relief support. Anir Chowdhury, Policy Advisor of Access to Information (A2I) Programme and Tanvir A Mishuk, Managing Director of Nagad also spoke at the dialogue.

Chowdhury highlighted the need for innovative ways to create awareness among the mass people about the relief programmes, while Mishuk outlined the importance of the use of technology to distribute cash relief.