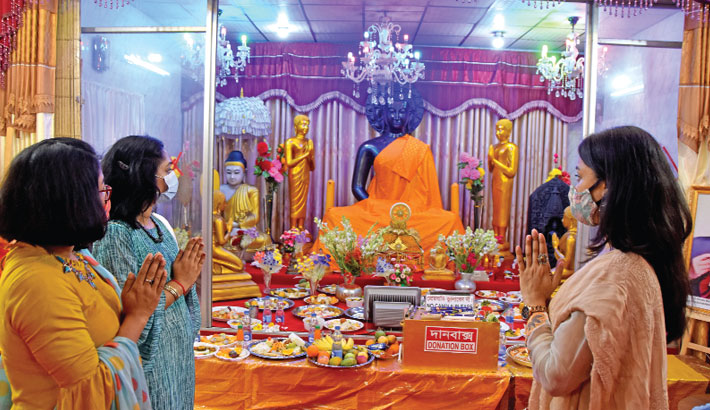 Buddhists offer prayers to Lord Buddha during celebration of Buddha Purnima at Basabo Buddhist Temple in the capital on Wednesday. — SUN photo

Buddha Purnima, the biggest religious festival of the Buddhist community, was celebrated in Dhaka and elsewhere in the country on Wednesday.

The celebrations began with lighting of lamps and hoisting of the national and religious flags atop the Mohabihar and chanting of sacred verses from the Tripitaka.

Maintaining social distancing, they brought out colourful processions from Sabujbagh and Merul Badda and the main thoroughfares of the capital in the morning.

In Chattogram, members of the Buddhist community celebrated their most sacred festival in the city and other districts of the division with traditional enthusiasm and solemn devotion.

The festival was celebrated in all monasteries. The national and religious flags were hoisted atop all monasteries at dawn and the sacred verses from the Tripitaka were chanted.

The Buddhist devotees offered prayers, fruits, flowers, candles etc. to statues of Lord Buddha throughout the day and they meditated, observed fasts and discussed the teachings of the Buddha.

Prayer meets, continuous recitation of Buddhist scriptures, processions, and worships of the statue of Buddha were also the highlights of the day’s programmes. The day was a public holiday.

On the occasion, newspapers have published special articles while Bangladesh Betar and FM radio stations and Bangladesh Television and private TV channels have aired special programmes highlighting the significance of the day.