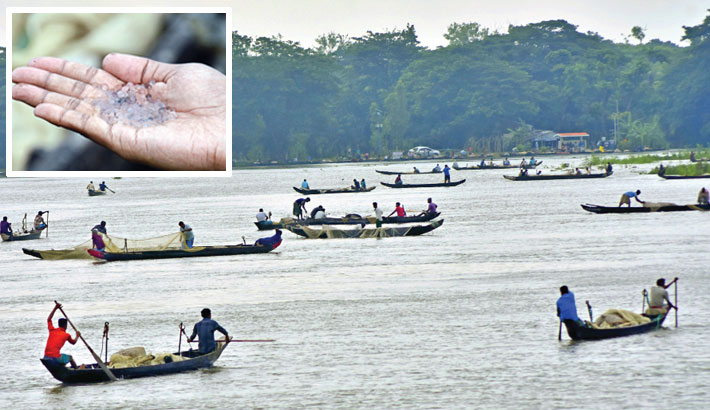 Fishermen collect spawns of fertilised eggs of fish in Halda River in Chattogram. The photo was taken on Wednesday. Inset: a fisherman shows eggs on his palm. —Rabin chowdhury

Sources said mother fishes started releasing the sample eggs to test the congenial atmosphere for releasing fertilised egg around 12:15am.

Following release of the sample eggs, the egg collectors got ready with their boats, special nets and other equipments in the river.

Some of them also collected the sample eggs, which will be of no use, from different spots, including Azimerghat, Pashchim Kagotia, Nayahat and Masuaghona under the Raozan and Hathazari upazilas, said the sources.

The researchers, district administration and the egg collectors hoped that the fishes will release the fertilised eggs during low or high-tide accompanied by thunderstorm within very short time.

However, salinity in the river water following the tidal surge under the influence of the cyclone ‘Yass’ may hamper the egg releasing process, feared the Halda Researcher and Chittagong University Zoology Department Professor Dr Manzoorul Kibria.

“Some 800 egg collectors are now waiting with some 350 boats for egg collection in the river,”

“The fishes will not release egg until the salinity in the river water reduces following rainfall,” observed the researchers.

He, however, expected huge egg in this season as pollution in the river could be reduced following drives and closure of industries for the coronavirus pandemic.

Hathazari Upazila Nirbahi Officer (UNO) Md Ruhul Amin said they were monitoring the activities and remained prepared to provide the available facilities to the fish collectors.

Some eight kilometre areas of the river were brought under CCTV camera facility for constant monitoring while sand lifting and movement of mechanised dredgers and boats were also suspended for creating a congenial atmosphere for the mother fishes, he said.

Mentionable, the egg collectors collected a record quantity of 25,536 kilograms of egg last year against only seven kilograms

It is learnt that during the months of Baishakh and Jaishtha (April and May), major carps start migrating from the Karnaphuli, Matamuhuri and Sangu rivers to the Halda, which was declared as ‘Bangabandhu Fisheries Heritage’ in December last year.

In congenial weather, usually at the first shower of the monsoon, mother fish starts laying fertilised eggs at suitable places of the river.