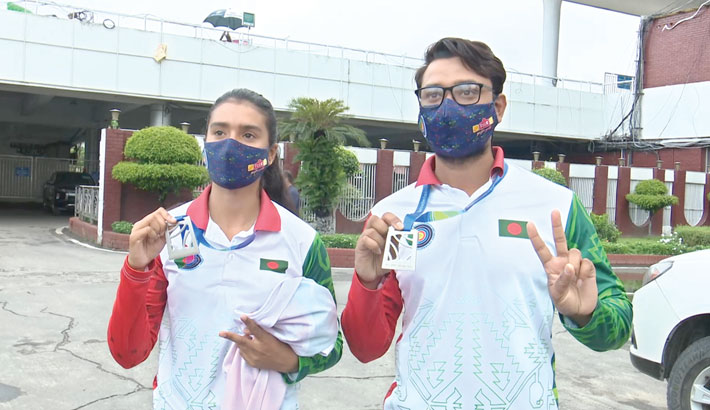 Bangladesh archers Ruman Shana and Diya Siddique show V-sign after their arrival at the Hazrat Shahjalal International Airport in the capital on Tuesday. — BAF PHOTO

Bangladesh archers are eyeing a quota place in the upcoming France World Cup stage three, scheduled to be held on June 21-27, after ending the campaign in Switzerland World Cup stage two with a silver medal.

Stage three will provide quotas for the upcoming Olympics and Bangladesh’s chances to gain a quota have increased after earning silver in stage two. “We are very happy with this success of the mixed team in Switzerland, it gives us the motivation to look forward to the third stage of the World Cup in Paris,” Bangladesh national head coach Martin Frederick told the reporters on Tuesday.

“The next mission is the World Cup, which is the last qualification for the Olympics. The team have a chance – men’s team, women’s team, and also the women's singles -- to earn a quota place, that is our goal. That is quite high, but we all try our best,” he added.

The recurve mixed team comprising Ruman Shana and Diya Siddique earned the first-ever silver medal for Bangladesh in any world cup which was held in Lausanne. Bangladesh coach was expecting ‘a little bit more' from the archers.

“The silver medal is great, but overall I was expecting a little bit more. So, we still have to work out. We are struggling now because we were without practice for more than five months. But it is okay now,” Frederick said.

The 11-member archery team landed in Dhaka on Tuesday at 5:00am. The team is now in quarantine in the archery training center at the Shaheed Ahsan Ullah Master Stadium in Tongi.

Archery federation general secretary and team delegation official Kazi Rajib Uddin Ahmed Chapal informed that the team will stay there in isolation and under strict health measures provided by the government until the Olympics campaign.

“Our main target is the Olympics,” Chapal said.

Country’s top archer Shana promised to continue his performance in the next meet.

“It was our dream to earn a medal in the World Cup and we achieved it. The achievement is a result of our joint effort. However, we made history in our sports arena; I will continue it,” Shana said.

“I and my teammate feel proud of the result. We have done something for the country. It was really amazing; I can't express my gladness in words,” Diya concluded.