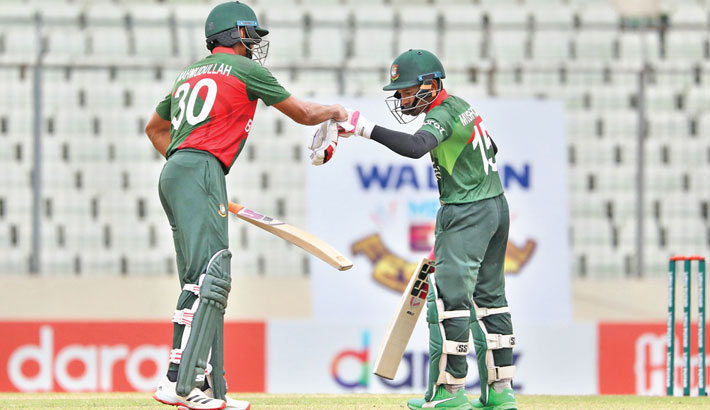 Bangladesh wicket-keeper batsman Mushfiqur Rahim (right) celebrates after scoring a half-century with teammate Mahmudullah Riyad during their second ODI match against Sri Lanka at the Sher-e-Bangla National Cricket Stadium in the capital on Tuesday. — BCB PHOTO

Bangladesh wicketkeeper-batsman Mushfiqur Rahim proved to be a one-man army when he struck an uncompromising hundred to help his side post a challenging total during the second one-day international against Sri Lanka in Dhaka on Tuesday.

The 33-year old, who struck a valiant 84 in the first ODI, didn’t waste the opportunity of scoring a hundred in the second match and it also ended his 15 innings century drought in one-day internationals.

Mushfiqur didn’t perform badly since his last ODI hundred against Australia in the 2019 World Cup in Nottingham as he struck six fifties in the last 15 innings but couldn’t convert those into three-digit figures despite coming too close on two occasions.

The right-hander was stranded at unbeaten 98 runs against the same opponent in Colombo in the second game of the three-match ODI series following the World Cup in 2019 while he failed to reach a well deserved hundred against Sri Lanka in the series opener on Sunday.

However, he was finally able to convert his fifty into a hundred during the second match and struck 125 off 127 balls with 10 fours to complete his eighth ODI ton, first at home after a gap of nearly five and a half years. 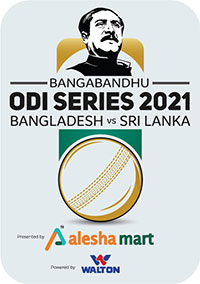 The experienced batsman played a top-class knock in the first match as well but his effort was overshadowed due to the reverse sweep he played that ended his innings.

Mushfiqur, however, didn’t repeat the same mistake on Tuesday as he reached his hundred with a boundary off pacer Dushmantha Chameera to fine leg despite there was slight drizzle going around, that earlier stopped the game twice for 26 and 38 minutes respectively.

Mushfiqur also surpassed his previous highest ODI score at home, 117 against India in 2015 at Fatullah and became the last batsman of Bangladesh innings to get dismissed after ensuring them a total of 246 runs on board.

The right-handed batsman earlier hardly looked tired despite sweating it out just 48 hours before in the scorching heat and played a laborious innings after coming to bat at 15-2 in the second over.

Despite the fall of wickets from the other hand, Mushfiqur was strong enough to lift his side and scored the majority of runs in Bangladesh innings to give their bowlers a decent total to defend.

Mushfiqur looked rock-solid in the innings and he delivered at the right time to make sure that hosts won’t face any embarrassment.

Mushfiqur, who is famous for his sweep and reverse sweep, didn’t try those a single time in the innings and the way he managed to resist his temptation only suggested his character and determination in order to get an ODI ton..