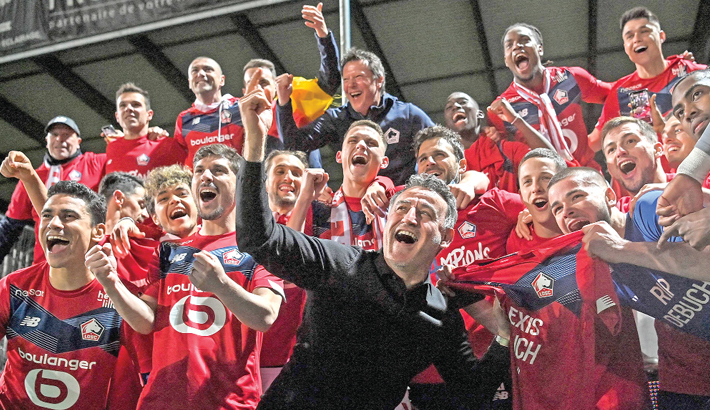 Lille players celebrate after defeating Angers and claiming the Ligue 1 title at The Raymond-Kopa Stadium in Angers on Sunday. – AFP PHOTO

Lille won the Ligue 1 title on Sunday thanks to a 2-1 victory over Angers which ensured they were crowned French champions for the first time since 2011.

An early Jonathan David strike and Burak Yilmaz's penalty in first-half stoppage time ensured that Christophe Galtier's Lille finished one point ahead of second-placed Paris Saint-Germain, who won 2-0 at Brest.

Angelo Fulgini pulled one back in added time at the end of the match, but the hosts couldn't stop Lille becoming champions for the fourth time in their history.

The title triumph came after another away success for Lille, who finish the season unbeaten on the road since November, and ends a three-year league winning streak for PSG.

Mauricio Pochettino's PSG will have to content themselves with the French Cup in a disappointing season for the Qatari-owned club.

Monaco won the race for the final Champions League position despite only managing a goalless draw at Lens, as Lyon lost 3-2 at home to mid-table outfit Nice and allowed the Principality club to claim third spot.

Lyon will take part in the Europa League alongside fifth-placed Marseille, who lost 1-0 at Metz.

Seven people were arrested as thousands of fans gathered despite a coronavirus curfew to celebrate Lille's Ligue 1 title, the prefecture of the Nord region said on Monday.

The fans gathered in the northern French city after Lille won at Angers to clinch the title in their last game of the season on Sunday night.

"The police had to make seven arrests, including one for 'attempted homicide against the police using a vehicle'," the prefecture said.

Three people were arrested for throwing projectiles, two for burning rubbish bins and one for possession of fireworks, it added.

Twenty people were treated by emergency services, including three who needed to be taken to hospital, the statement said.