Ceasefire Not Enough for Peace in Palestine 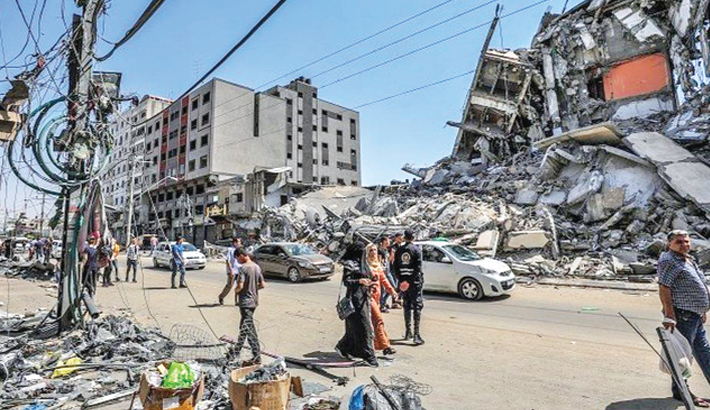 The past two weeks, the people of Palestine have been subjected to an asymmetrical warfare from Israel. Deaths of innocent children in occupied East Jerusalem, cocktail of chemical weapons on protesters and home evictions are some of the acts of dehumanising violence targeting Palestinians. The oppression Palestinians tragically suffer at the hands of Israel is not restricted to such actions only.

Reflecting on what happened over the past 11 days, it would be wrong and prejudicial to describe the situation between Palestine and Israel as a “conflict” or “war”. What was happening in Palestine was settler colonialism, military occupation and ethnic cleansing. In this scenario Israel is an active oppressor and Palestine is the oppressed.

Over 248 people were killed in Gaza, including 65 children and over 72,000 people were displaced as reported by Al Jazeera. Ending the torment, a brokered ceasefire was agreed upon between Israel and Hamas that started as of 2 am on May 21, Friday. Thousands of Palestinians took to the streets in celebration, rejoicing with fireworks the opportunity to finally celebrate Eid.

However, merely three hours before the ceasefire Israel carried out airstrikes on Gaza, which was reported by Al Jazeera. This forces the world to ask – is the ceasefire enough? Not a day later the Israeli occupation forces stormed the Al Aqsa Mosque in Jerusalem, attacking the Palestinian worshipers. Rubber bullets, bombs and stun guns were used on the worshipers at this holy mosque, reported the Institute for Middle East Understanding.

A ceasefire is unquestionably welcome, but this doesn’t end the oppression of Palestinians, it doesn’t end the blockade and restrictions that have been placed in Palestine. Settler colonialism has led to forced displacement of Palestinians and the rapid amplification of Israeli settlements in the West Bank. This has been going on in Palestine since 1978, making it the longest-running military occupation in history.

For the past 70 years, Israel has been the governing power over Palestine and its people. The policies Israel constitutes are akin to apartheid which is defined as, “inhuman acts committed for the purpose of establishing and maintaining domination by one racial group of persons over any other racial group of persons and systematically oppressing them”. These polices have orphaned Palestinians and besieged, killed and kept them in what we can describe as an open jail.

Israel has banned traveling for Palestinians without their permission, and not having an airport they need additional permits. Palestinians are restricted from using “Israeli only” roads, crossing and checkpoints. With walls built around the cities separating Palestinians from Palestinians, the discrimination persists as Israel protects its settlers.

Our honourable Prime Minister Sheikh Hasina has openly stood by the Palestinians and has publicly expressed that she is “deeply saddened” by the events taking place. It is our job as Muslims and humans to stand with our fellow brothers and sisters in Palestine and keep the conversation going.

To return to my question of whether a ceasefire is enough. No, a ceasefire is only bringing the genocide to a lower intensity of violence and ethnic cleansing, not halting it permanently. While the ceasefire allows Israelis to go back to the beach, it continues to deprive Palestinians of their freedom, security, dignity and the pursuit of happiness.

The writer is an intern at the Daily Sun