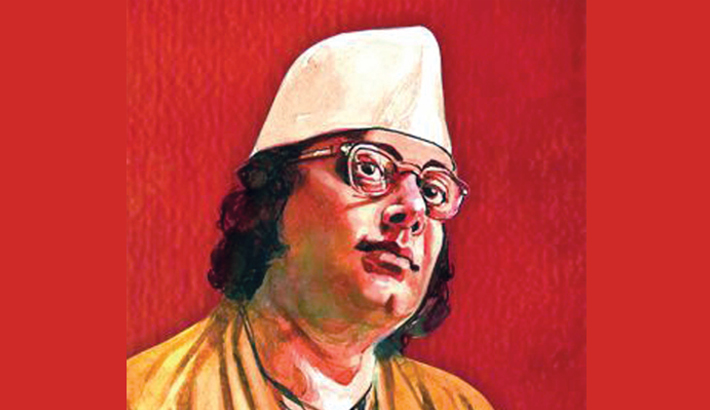 The 122nd birth anniversary of National Poet Kazi Nazrul Islam will be celebrated across the country  today in a befitting manner. Different cultural and social organisations will celebrate the day virtually due to ongoing coronavirus pandemic.

Bangladesh Shilpakala Academy has organised a cultural programme marking the day. The virtual programme will be streamed live through the academy’s Facebook page and YouTube channel at 3:00pm onward. 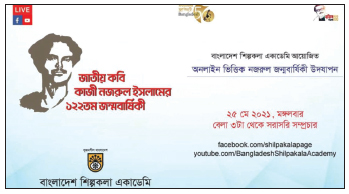 On the occasion of Nazrul’s birth anniversary, different television channels also have arranged array of programmes.

‘Tobu Amare Debona Bhulite’, documentary on Kazi Nazrul will be aired on Rtv at 8:30am today. The channel will also air special 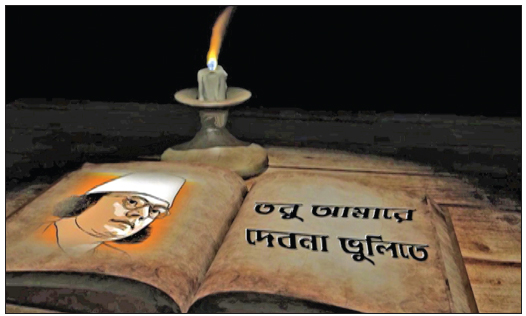 drama ‘Boner Papiya’ at 8:00pm.  Chanchal Chowdhury, Sanjida Preeti, Khairul Tipu and others will play different roles in the drama.

A special discussion on Kazi Nazrul will be aired on Banglavision at 8:30am. Produced by Khairul Babui, singer Shahid Kabir Polash will attend the programme as guest.

Kazi Nazrul Islam, known as the Rebel Poet, was born on 25 May 1899 in Churulia, near Asansol in the Burdwan district of West Bengal. He influenced the literary world of Bangladesh with his poetry, music, philosophies and revolutionary views. Nazrul wrote poetry of love and freedom, but also condemned oppression and bigotry through his writings.

He was famous for his fiery poem Bidrohi (The Rebel) and his many melodious songs. He was a poet, lyricist, musician, revolutionary and philosopher.

The nation got inspirations from Nazrul’s poems and songs during the Liberation War and all democratic movements and struggles.

There are 2,400 of his songs, and together, they are known as Nazrul-Geeti or Nazrul Sangeet. He composed the songs, which he liked to tune himself.

Considering his impressive talent, Rabindranath Tagore dubbed him as Saraswati’s bor-putra (the gifted son of the Goddess of learning).

After independence, Nazrul was declared the national poet of Bangladesh and he was brought to Dhaka from Kolkata.

The poet breathed his last in Dhaka on August 29, 1976 and he was buried on the premises of Dhaka University central mosque with state honour.