Bangladesh must plan for transition to renewables: IEEFA 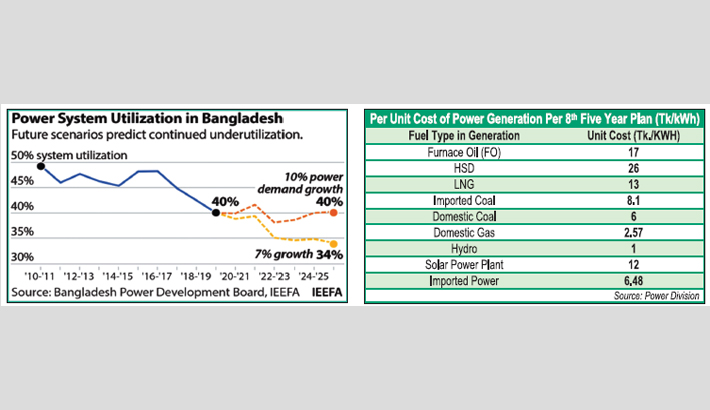 Bangladesh must chalk out transition to renewable energy in its new energy master plan towards zero carbon goals, said the Institute for Energy Economics and Financial Analysis (IEEFA) in its latest report.

The plan is currently under development by Japan International Cooperation Agency (JICA).

The author of the report and energy finance analyst Simon Nicholas said the upcoming Integrated Energy and Electricity Master Plan (IEEMP), if aligned to the government’s new five-year plan, will abandon coal and increased LNG commitment in favour of cheaper low emission renewables.

“Any increased reliance on coal and LNG risks seeing electricity costs for energy consumers rise even further at a time when ever-cheaper solar and wind power is available,” according to Nicholas.

The analyst said, “The Japanese developers of Bangladesh’s new Integrated Energy and Electricity Master Plan have the platinum opportunity to align their thinking with the insightfulness of the government’s 8th Five-Year Plan.”

The significantly scale up of renewable energy ambition to benefit from the rapid decline of lower cost solar and wind tariffs and to meet demand growth and energy efficiency goals, he said.

NIclolas said there should be plan for the roll out of power storage technologies like batteries that can store renewable energy.

“The previous power master plan also prepared by Japan is not fit for purpose and risks the financial sustainability of the power system. The new 8th Five-Year Plan recognises this,” the analyst said.

“Japan must not prepare another power plan in its own interests rather than in the best interests of Bangladesh.”

Nicholas said JICA would be aware that Japanese trading houses and financial institutions have been accelerating their exit from fossil fuel financing.

“Coal and LNG are carbon-intensive fuel sources, and the most technologically and economically challenged by the current global energy transition to renewable clean energy.

He added, “If JICA funds coal power and creates a plan for more high-cost LNG-fired capacity it will be worsening overcapacity and increasing the likelihood of power tariff increases for consumers.”

The 8FYP notes that the cost of power in Bangladesh rose 41 percent between FY2015 and FY2020 due to the increased use of oil and diesel in the power system’s fuel mix over the period.

Significantly, it also notes that a future in which Bangladesh becomes more reliant on imported coal and LNG risks seeing the cost of electricity rise even further.

“It appears that the increasing reliance on imported fuel (higher priced LNG and imported coal) will continue in the future, and so will increase the production cost of electricity, unless efficiency and other cost measures are taken.”

The 8FYP notes the price risk that comes with LNG reliance, “The LNG price will face the international price volatility, and will be requiring regular price adjustments for sustainability.”

The 8FYP also includes a table showing the relative cost of power generation from each source, highlighting that only oil and high speed diesel (HSD) are more expensive than LNG (Table 1).

Bangladesh - along with Pakistan and India – cancelled LNG shipments in January 2021 amidst the price surge due to the high costs, and gas had to be rationed as a consequence.  This followed the cancellation of several Bangladesh LNG tenders in 2020 on the basis that bid prices were too high even before the January price spike.

The Power Development Board (PDB) makes significant financial losses each year as power is sold at less than the cost of generation.

These losses have to be covered by government subsidies. The situation is being made worse by overcapacity, which is seeing capacity payments to power generators rise, increasing the average cost of power generation.