Archers confident of conquering the summit 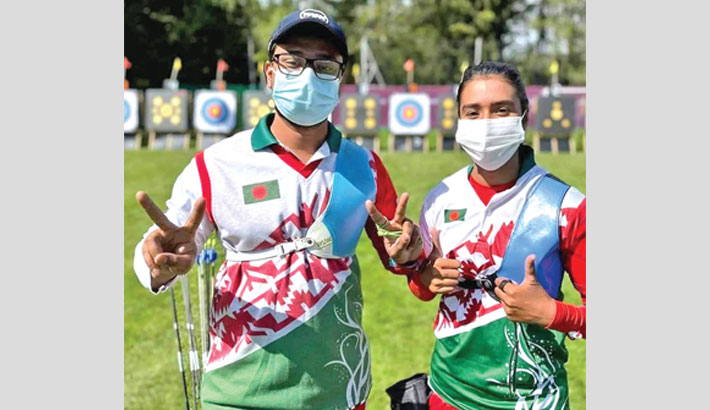 Bangladesh archers - Ruman Shana and Diya Siddique on Saturday expressed their confidence in winning the gold medal in the recurve mixed team final of the ongoing Archery World Cup stage two at Lausanne in Switzerland.

The Bangladeshi pair will take on second-seeded Netherlands pair - Gabriela Schloesser and Sjef Van Den Berg in the final today to clinch the first-ever Archery World Cup gold medal for their country.

“We are confident enough to win tomorrow's (today’s) match. I’m grateful to our sponsor City Group. Our training camp has been running under their supervision – a project titled ‘Teer Go for Gold’. Today we may not come here if they won’t sponsor us,” Shana said in a video message.

The Shana-Diya pair created a new history when they became the first Bangladeshi archers to qualify in the final of an Archery World Cup after beating Canada by 5-3 set-points in the semifinals in their event on Thursday.

Bangladesh’s biggest success in an Archery World Cup till the date was Shana’s winning bronze medal in the recurve men’s event in the 2019 edition of the same meet in Netherlands and Bangladesh have already managed to surpass that feat after reaching the final this time.

Shana’s partner Diya expressed her excitement about the match and vowed to give her best shot in the World Cup final.

“We are playing in the final of a world championship for the first time. We will try to give our best in the final. I’m asking for blessings from my country,” she said in a separate video message.

Bangladesh’s opponents, Netherlands earlier beat Mexico in the semifinals while they defeated their France and Kazakhstan opponents in their previous two round matches. Netherlands received a bye in their first-round match.

“We know we are a good team and this can help us in the Olympic preparations. I can say that I’m really happy and I can see Sjef is also. I’m already excited about Sunday,” said Gabriela.