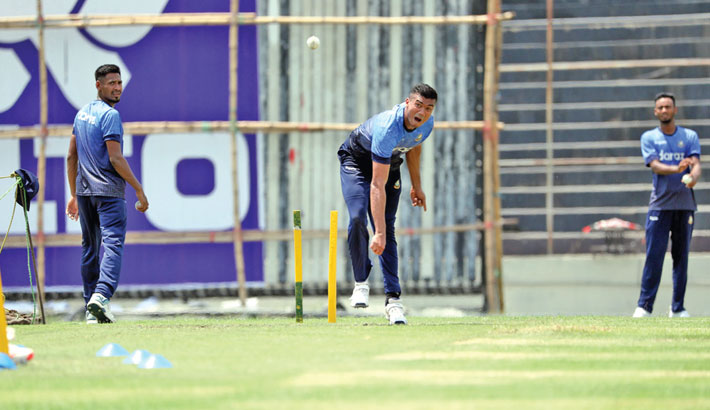 Bangladesh pacer Taskin Ahmed (centre) bowls during a training session as pacers Mustafizur Rahman (left) and Shoriful Islam look on at the Sher-e-Bangla National Cricket Stadium in the capital on Saturday. — BCB PHOTO

Bangladesh lost nine out of their last 10 international matches across all formats mostly because of their self errors and according to the South African coach, they are well aware that their back is against the wall before taking on Sri Lanka in the home series.

“We have gone through a lean period of results. But we have to learn from the mistakes from the last couple of months. There’s no point focusing on the past. We have to look forward,” Domingo told reporters during a virtual press conference on Saturday.

“If we play to our potential in tomorrow’s (today’s) game, we can give ourselves a chance of winning. We can’t always control the result but we can control the way we prepare, our mindset and thinking.

“As a coach, I think it is important that you stick to your principles, beliefs and try to do the right thing. I am trying to do the best of my ability. In terms of players in international cricket, there’s always pressure – media scrutiny, personal pressure, from family, friends and peers. 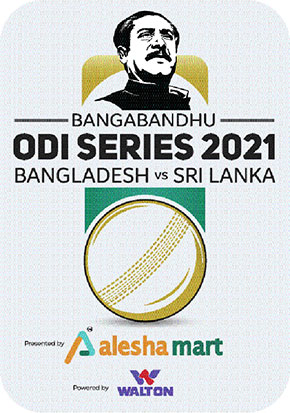 “It is easy to say go out there and play, but it is not schoolboy cricket. Players are very serious when they are representing their country. As coaches you try to take that pressure away from the players. Prepare them well. Make sure their minds are clear,” he added.

Domingo also believed that his charges need to drop out their disappointing performance as a fielding unit from their mindset in order to excel.

Bangladesh fielding came under scrutiny during their tour of New Zealand where the fielding unit was heavily exposed with a shambolic performance that cost them conceding clean sweeps in both the ODI and T20I series.

Their fielding was exposed once again as they continued to drop catches coupled by being sloppy in the field during the two-match Test series against Sri Lanka that is believed to have made them pay eventually in the end.

Many feel inside the cricket fraternity that Bangladeshi cricketers failed to get over after making a mistake and as it keeps rolling into their head that only complicates things for them and Domingo endorsed it adding that they need to be mentally stronger to perform well as a fielding unit.

“I don’t think there’s anything that you can do differently as a coach. Fielding is all about confidence. The more you talk about it, the harder it becomes. We can highlight some of our great fielding performances and focus on those and try to take the positives about those performances.

“We have taken some good catches and run-outs but we have to do it on a more consistent basis. We have to try and not focus too much on the mistakes,” he added.

Domingo also put the onus on the young players to seal their spot in the side as he felt that they needed to fill the shoes of their seniors.

With Mahmudullah recovering from his back injury, Bangladesh now have the luxury to play three pacers with Afif Hossain chipping in a few overs as well.

“I think we are trying to find someone that can slot into the No 7 role - a batter who can offer a spin-bowling option. There's Afif and Mosaddek (Hossain) while we have floated the idea of Soumya (Sarkar) being down there,” said Domingo.

“Six months ahead of the World Cup, we have to know what our batting line-up is going to be. Whilst winning is very important in these series where points are up for grabs, it also allows you to finalise what batting line-up you will have in two years’ time,” he added.