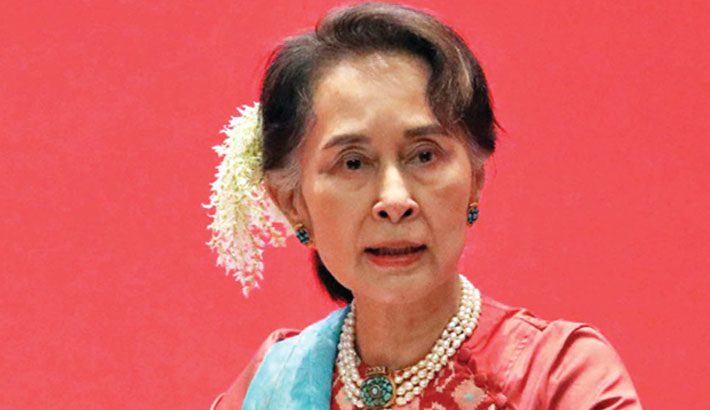 YANGON: Myanmar’s junta chief has said deposed civilian leader Aung San Suu Kyi is in good health and will appear in court within days during the general’s first television interview since the coup, reports AFP.

Min Aung Hlaing, who toppled Suu Kyi in a February 1 putsch, gave a two-hour interview to Hong Kong’s Phoenix Television on Thursday, with the full programme yet to air.

“Aung San Suu Kyi is in good health. She’s been staying at home and will appear in court in a few days,” he said in an excerpt released on social media Saturday.

The general was speaking in Burmese and his comments were translated into Chinese by the network.

Asked about Suu Kyi’s political achievements, the military leader said: “In short, she has done everything she can.”

Suu Kyi has not been seen in public since she was placed under house arrest.

She has been hit with a string of criminal charges including flouting coronavirus restrictions during last year’s election campaign and possessing unlicensed walkie-talkies.

The most serious charge alleges that she violated the country’s colonial-era Official Secrets Act.

Suu Kyi is expected to appear in person in court on Monday for the first time, after weeks of delays to her legal case.

Her legal team have faced an uphill battle to meet with their client in private.

The junta on Friday threatened to dissolve Suu Kyi’s National League for Democracy (NLD) party over alleged voter fraud in the 2020 election.

“What shall we do with the (NLD) party that (acted) illegally? Should we dissolve the party or charge those who committed this (illegal activity) as traitors of the nation? We will analyse and consider taking this action,” he said, in a video posted to a local media outlet’s Facebook page.

The election commission met with political parties on Friday to discuss potential changes to the system but NLD representatives did not attend.

Min Aung Hlaing has justified his power grab by citing alleged electoral fraud in the November poll, which was won by the NLD in a landslide.

But the Asian Network for Free Elections monitoring group has said “the results of the 2020 general elections were, by and large, representative of the will of the people”.

Upon seizing power, the military announced a one-year state of emergency and said it would be followed by fresh multi-party elections.

“What we want to achieve is a federal state based on multi-party democracy and confederation. If the situation permits, we hope to achieve this within a year, and if not, we will postpone it for six months,” he told Phoenix TV.

On Thursday local media reported the junta had removed a mandatory retirement age for generals, which would allow Min Aung Hlaing to continue serving once he turns 65 this July.

The junta leader said he had “no idea” when asked about his future plans.

Myanmar has been in chaos and its economy paralysed since the coup and according to a local monitoring group more than 800 people have died as the military moved to crack down on dissent.

Min Aung Hlaing disputed the death toll during his television appearance, estimating the number of deaths at 300 and saying 47 police had been killed and 200 injured.

A group of ousted lawmakers—many of them previously part of the NLD—have formed a shadow “National Unity Government” in an attempt to undermine the junta.

The military later declared the group would be classified as “terrorists”.

The bloc issued a “five-point consensus” statement that called for the “immediate cessation of violence” and a visit to Myanmar by a regional special envoy.

The junta leader said in the television interview that Myanmar was not ready to adopt the plan.