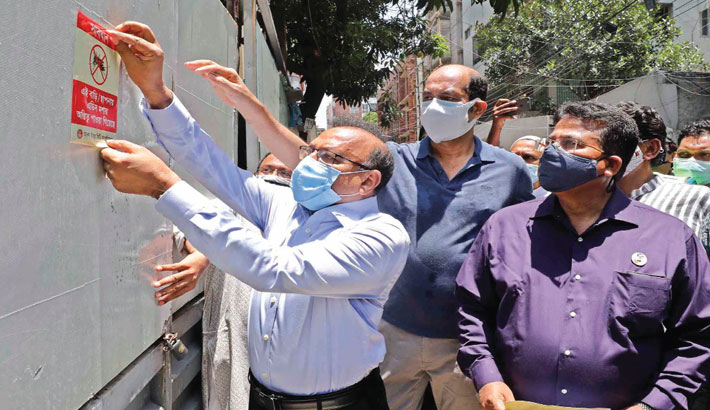 Local Government and Rural Development Minister Md Tazul Islam pastes a sticker on the gate of a house reading ‘Beware! Aedes mosquitoes are found here’ during the inauguration of mosquito awareness campaign in Mirpur on Saturday. Dhaka North City Corporation Mayor Atiqul Islam was present on the occasion. —SUN photo

He said this while speaking as the chief guest at the inauguration of Aedes Mosquito, Dengue and Chikungunya awareness campaign organised by Dhaka North City Corporation (DNCC) in Mirpur.

Both North and the South city corporations will operate mobile courts against those who fail to destroy breeding grounds of mosquitoes despite repeated warnings, he said.

They have appointed 10 magistrates to run the mobile courts, he said.

“A community cannot suffer due to the negligence of a few,” Tazul said adding “It is a punishable offense.”

He said the City Corporations cannot always go door to door to kill mosquitoes and so the people are being made aware through campaigns.

Aedes mosquito is responsible for spreading dengue and chikungunya fever.

DNCC mayor Atiqul Islam was present at the event and agreed with the minister on the need for civic awareness.