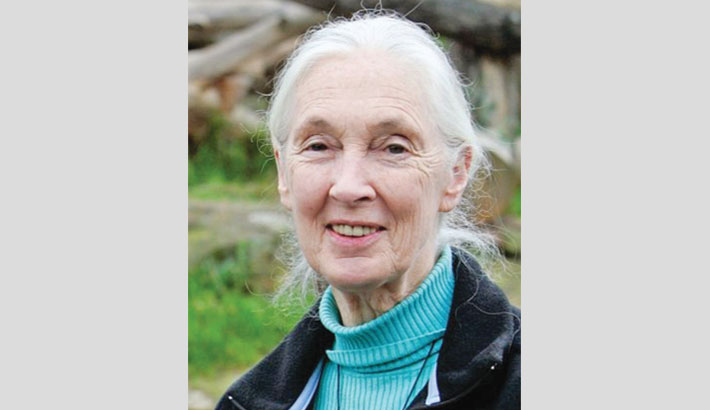 Humanity needs to discover a “new mindset for our survival” as the world exits the pandemic only to face the looming dual crises of climate change and nature loss, renowned conservationist Jane Goodall said on Thursday.

In an interview with AFP, the world’s pre-eminent primatologist said she was hopeful that Covid-19 could change people’s approach to how we interact with Earth.

“We basically brought this on ourselves by our disrespect of the natural world, forcing animals closer to people, making it easier for a pathogen to jump from an animal to a person,” said Goodall. “And then, our absolute disrespect of animals—hunting them, killing them, eating them, capturing them, trafficking them, forcing them into terrible conditions, unhygienic and very, very cruel intensive factory farms.

“So hopefully this pandemic has woken people up. We must develop a new relationship with the natural world.”

Goodall warned against the temptation to rush back to unfettered economic growth at the expense of the planet and called on policymakers to redefine their approach to governance.

“Unfortunately there are too many people in power who are just eager to get back to business as usual. It’s all about the bottom line, about money,” she said.

“We have to somehow create a more sustainable, greener economy. We have to have a new mindset for our survival.”

Goodall, 87, has dedicated her life to better understanding the animal kingdom and promoting conservation efforts.

Born in London and without the funds to take a university course, she shot to international stardom in 1965 when she was featured on the cover of National Geographic for her trailblazing research on chimpanzees in Tanzania.

Her pioneering, up-close study of the behaviour of chimpanzees in the 1960s was the first to observe them using tools, a capacity that was until then thought to belong only to humans.

In the decades since, Goodall has championed sustainable practices and the preservation of nature through grassroots organisations and initiatives in all corners of the planet.

Normally a frequent traveller, she said the pandemic has forced her to adapt her activism. Among the new communication tools, last year she launched “Hopecast”, a podcast recorded in the attic studio of her childhood home urging listeners to be hopeful for the future of the planet.

Faced with ever bleaker warnings from scientists about climate change and biodiversity loss, Goodall insists it is possible for everyone to retain that hopefulness.

“Almost everything I do has hope in it. If you don’t hope that your actions are going to make change, why bother to act?” she said.

Ever the scientist, Goodall uses real-world evidence to back up her hopeful stance.

“I’ve had the privilege of travelling all around the world and I’ve met the most amazing people doing incredible projects,” she said.

“I’ve seen projects that are completely turning things around. Areas that we have utterly destroyed... nature can come back if we give her a change. Animals on the brink of extinction can be given a second chance.”

The United Nations this week said that countries had met a goal set a decade ago to protect 17 percent of land and 10 percent of marine environments by 2020.

“This movement is growing and this pandemic has given us a new sense of urgency,” said Goodall.

“And if you lose hope, you may as well give up. So whether it’s logical or not, that’s my job. And I couldn’t do it if I didn’t believe that if we get together now before it’s too late we can indeed slow down climate change and slow down biodiversity loss.”

Goodall on Thursday joined the likes of Mother Teresa and the Dalai Lama in receiving the Templeton Prize, one of the world’s largest individual lifetime achievement awards.

Heather Templeton Dill, president of the John Templeton Foundation that awards the prize, said Goodall was selected for her scientific breakthroughs that “have profoundly altered the world’s view of animal intelligence and enriched our understanding of humanity”.

Goodall, who said she was “kind of blown away” to win, said she believed the world was reaching a “critical mass of people” who were passionate about preserving nature.

“None of us can absolutely predict what’s going to happen. So we just have to go on doing what we can do in the belief that we do have this window of time where we have to work really hard at changing governments, changing business and changing the mindsets of ordinary people,” she said.

“I don’t pretend to have all the answers. All I know is I am here to do everything I can to move us in the right direction. That’s all I can do. And that’s what I’ll spend the rest of my life doing.”