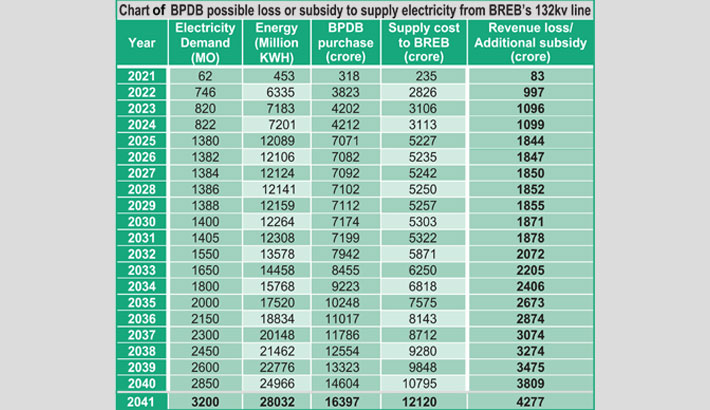 “If the government allows supplying of electricity to large industrial units from the REB’s 132KV lines, the power sector’s subsidy may increase,” said Engineer Belayet Hossain, Chairman to Bangladesh Power Development Board (BPDB).

Now, BPDB is currently supplying electricity to the REB at Tk 4.32 per unit against the production cost of Tk 6.30 per unit, he informed.

Saiful Islam Azad, secretary to BPDB in a letter sent recently to the Power Division feared that a further increase of subsidy in the sector will pose new challenges in its financial management.

However, the REB opposed the BPDB’s observations, saying that the electrification board has already invested billions of Taka to improve the distribution lines for electricity supply to industries. “The government has a plan to implement 100 special economic zones, most of which will be in the REB areas,” REB chairman Maj Gen (Retd) Moin Uddin told the daily sun.

He added, “15 special economic zones have so far started their activities with REB supplied electricity. We, therefore, hope the government will allow us to expand our electricity supply to the large industrial units.”

Moin Uddin said the REB was taking preparations to supply the electricity as per the decision of Bangladesh Energy Regulatory Commission (BERC).

He said if the BPDB incurred bulk tariff supply loss, the government would compensate that through subsidies.

However, according to the BPDB letter, the BERC has yet to fix bulk tariff in 132KV lines for the REB.  “So, there is no provision for supplying electricity to large industrial units by the REB,” the letter claimed.

“If the REB will supply the electricity to industrial units directly, the BERC may require an adjustment of the bulk tariff for the BPDB,” the letter said. The BPDB also proposed policy for equal distribution of the transmission loss. In a meeting at Power Division in March, 2021, the BPDB said it would incur loss of Tk 830 million if the electricity supply to large industrial units from the BREB’s 132kv lines. The BPDB said its loss will increase to Tk 42.77 billion in 2041, which will lead to substantial increase of power subsidy in the current tariff structure.