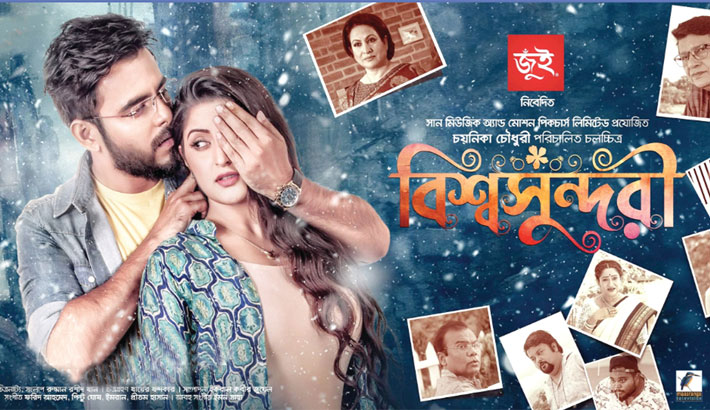 Popular actors Siam Ahmed and Pori Moni starrer Chayanika Chowdhury’s film ‘Bishwoshundori’ was digitally released on Friday. The film was released in 20 cinema halls across the country on December 11 in 2020.

Officials of Sun Music and Motion Pictures Limited said, “We are releasing the film on a digital platform for the audience who have missed the film in theatres. Through its digital release, we can reach global audience. Now anyone can watch the film from any side of the world.”

The viewers can enjoy the movie through the following link: https://bishwoshundori.maasranga.tv/

The ticket price of the film is BDT 200 and it can be collected by SMS or E-mail.

‘Bishwoshundori’ is a romantic drama film. This is the celebrated small screen director Chayanika Chowdhury’s debut film. The story, screenplay and dialogue of the movie have been written by Rumman Rashid Khan.

Alongside Siam Ahmed and Pori Moni, the film stars Champa, Alamgir, Fazlur Rahman Babu, Monira Mithu, Anondo Khaled among others. The film is produced by Sun Music and Motion Pictures Limited and distributed by Jaaz Multimedia.

Masranga Television is the broadcast partner & owns the TV rights. The soundtracks of the film are composed by Imran, Pritom Hasan, Kona, Farid Ahmed and Pintu Ghosh.