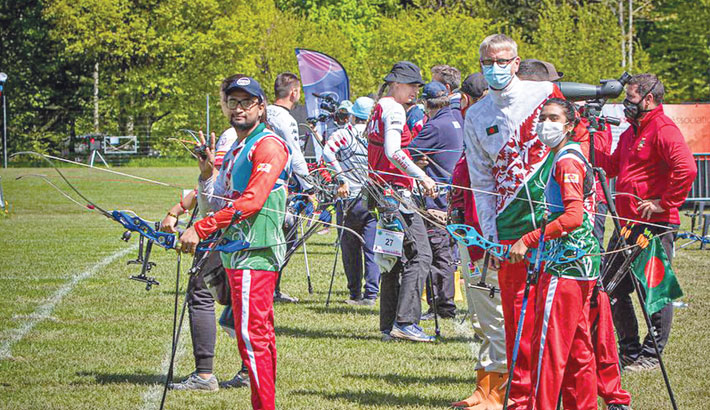 All eyes will be on Ruman Shana and Diya Siddique when they play the final in the recurve mixed team event of the ongoing Archery World Cup stage two at Lausanne in Switzerland on Sunday.

The pair created a new history on Thursday when they became the first Bangladeshi archers to qualify in the final of an Archery World Cup and now the stake is even bigger as they can give Bangladesh the taste of winning their first gold medal in a World Cup event.

Bangladesh’s biggest success in an Archery World Cup till the date was Shana’s winning bronze medal in the recurve men's event in the 2019 edition of the same meet in Netherlands and now the top archer of the country has the opportunity to turn his bronze into gold along with his partner Diya.

The Shana-Diya pair now has the opportunity to complete the run with a gold medal when they face second-seeded Netherlands pair - Gabriela Schloesser and Sjef Van Den Berg in the final.

The pair earlier beat Mexico in the semifinals while they defeated their France and Kazakhstan opponents in their previous two round matches. Netherlands received a bye in their first-round match.

Bangladesh’s German head coach Martin Frederick was over the moon after the pair stormed into the final and hoped that they would be able to continue their form in the final.

“It’s not the ending. We have done well but now are looking for the better,” Martin told The Daily Sun on Friday.

“Diya was very confident. She knew how to deal with the situation. She is going to be the next top archer in Bangladesh. Shana, on the other hand, was highly motivated during the team events.  I think he proved his worth again. Hopefully, they will keep it in the final on Sunday,” he added.

Despite Shana’s overwhelming performances in the various international events earlier, there was a doubt before the World Cup on his current form as he failed to perform well in the recent Bangabandhu Bangladesh Games as well as in some other domestic events such as Victory Day Archery and National Championship.

The poor performances raised questions on his mental and physical fitness and it also put his participation in Tokyo Olympics in doubt considering Bangladesh earned a direct entry as a country, not the player.

However, Martin backed him for representing Bangladesh in international events after he scored the highest 679 points in the 3-day trial (ranking tournament) last month before leaving Dhaka for Switzerland.

However, the country’s premier archer never won a gold medal in an Archery World Cup and now he's one step away from creating the milestone.

“I don’t know how to explain it. It’s the first time Bangladesh made the final. I’m really happy and grateful to my coach, my teachers, my family and my partner, who was supporting me so much,” said Shana.

Diya, who also shared the same credit as her team-mate Shana on taking Bangladesh to a World Cup final, expressed her excitement saying, “I’m so excited. I don’t even understand it’s a final. It’s so shocking.”

The performances of Shana and Diya now make Bangladesh dream for another Olympic entry which will be finalised at World Cup stage three scheduled to be held in Paris, France on June 21-27.