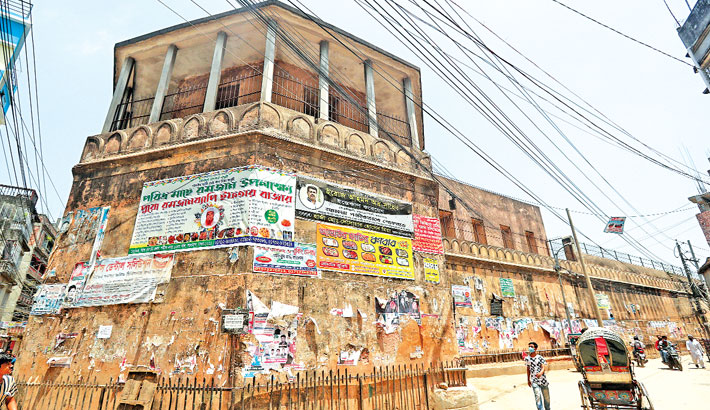 Banners and posters, mostly political, pop up on the exterior of the boundary walls of Lalbagh Fort, a historical and archaeological site in the old part of Dhaka, marring its pristine beauty. Inset, a notice hanging on the wall only a yard away prohibits such actions. The photographs were taken on Friday. —Reaz Ahmed Sumon

A notice saying ‘the fort museum is an emblem of historical significance for Bangladesh’ has been put up on the wall of Lalbagh Fort located in the old part of Dhaka city.

“It is a moral duty for every citizen to protect this historical fort. Therefore, it is requested not to throw garbage in the surrounding area, and not to put up poster, banner, and festoon on the wall,” reads the notice.

The authorities may have thought that they have taken enough steps to protect the wonderful Mughal edifice by hanging this notice and may be that is why they haven’t felt the importance of monitoring activities of the greedy people towards this historic establishment.

Taking advantage of their indifferent attitude, a section of unscrupulous people have been nailing posters, banners and festoons of their personal and commercial advertisements indiscriminately to the wall which not only are fading the beauty of the age-old fort but also are violating the laws.

The Department of Archaeology is the custodian of our heritage artifacts. They are supposed to take care of the Lalbagh Fort. But locals have complained that the Archeological Department hardly visits the area and takes necessary steps to protect the gigantic fort.

Despite repeated efforts to get a statement from the archeological engineer and regional director of the Archeological Department regarding the current situation of the Lalbagh Fort wall, no one responded.

It is mentionable that earlier in 2015, the authorities demolished a part of Lalbagh Fort’s wall to build a car park violating the main design of the fort and the Antiquities Act, 1968.

The action then drew huge protests and criticisms and finally the construction was stopped as the High Court directed the authorities concerned to do so.