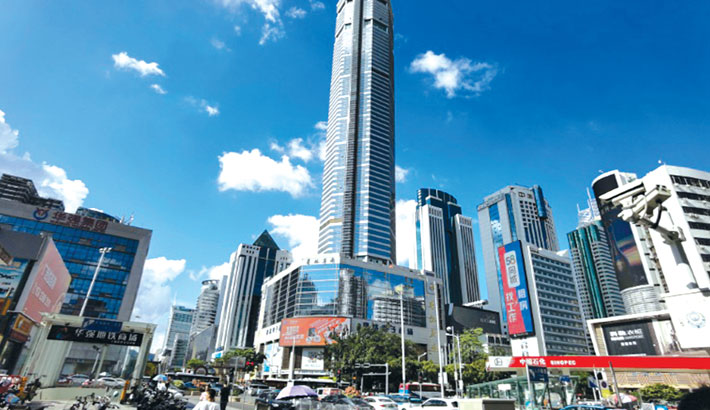 BEIJING: A skyscraper in southern China that caused panic when it started to shake earlier this week will stay closed for the foreseeable future, the owner of the building said, as the cause of the swaying is investigated.

The 300-metre (1,000-foot) SEG Plaza in the southern city of Shenzhen near Hong Kong began shaking in the early afternoon on Tuesday, prompting people inside and those on the streets below to flee, reports AFP.

Emergency management officials quickly ruled out an earthquake as the cause of the wobble in the tech hub's Futian district. In an internal notice to the tenants and merchants shared by official news agency Xinhua, the building owner said no one would be allowed to enter until an investigation was finished, without giving an idea on the timeframe.

The SEG Group has banned "all owners, merchants and tenants from entering or leaving the SEG Building and electronics market...(which) will open again after the relevant inspection work is completed," the statement dated Thursday said.

The measure come into effect from Friday.

The building is named after the semiconductor and electronics manufacturer Shenzhen Electronics Group, whose offices are based in the complex along with a major electronics market.

Officials said late Wednesday that engineers monitoring the building since Tuesday night had not found movements larger than the building code limit for skyscrapers.

Experts also found "no safety abnormalities in the main structure and surrounding environment of the building," the local government said in a statement.

Engineers have been using drones this week to inspect the building, which was completed in 2000.

Earlier this week traders were seen carrying stock out of the electronics mall on the lower levels of the building.

Building collapses are not rare in China, where lax construction standards and breakneck urbanisation over recent decades has led to buildings being thrown up in haste.

A day after the building was evacuated, the US consulate in nearby Guangzhou on Wednesday warned citizens to avoid the area surrounding the tower, warning of "inadequate information to assess the safety risks."